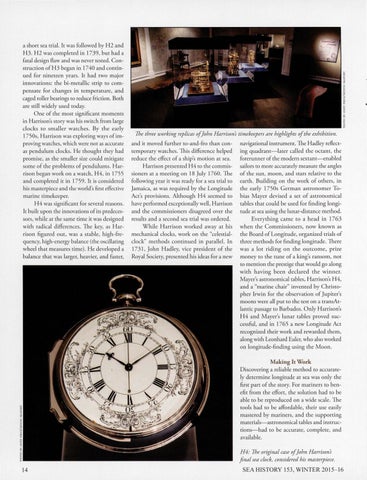 a shore sea rrial. Ir was followed by H 2 and H 3. H 2 was completed in 1739, bur had a fa tal design Raw and was never rested. Construction of H 3 began in 1740 and continued for nineteen years. Ir had two major innovations: the bi-metallic strip to compensate fo r ch anges in temperature, and caged roller bearings to reduce friction. Both are still widely used today. One of the most significant moments in H arrison's story was his switch from large clocks ro sm aller wa tch es . By the early 175 0s, H arrison was explorin g ways of improving watches, which were not as accurate as pendulum clocks. H e thought they had promise, as the smaller size could mitigate some of the probl ems of pendulums. H arrison began work on a watch, H 4, in 1755 and completed it in 1759 . Ir is considered his masterpiece and the wo rld's first effective marine timekeeper. H 4 was significant fo r several reaso ns. Ir built upon rhe innovations ofirs predecesso rs, while at rhe same rime it was designed with radi cal differences. The key, as H arrison fi gured our, was a stable, high-frequency, high-energy balance (the oscillating wheel that measures rime) . H e developed a balance rhar was larger, heavier, and fas ter,

The three working replicas of John Harrison's timekeepers are highlights of the exhibition. and it moved further to-and-fro than contemporary watches . This difference helped reduce the effect of a ship's morion at sea. H arrison prese nted H 4 to the commissioners at a meeting on 18 July 1760. The fo llowing year it was ready fo r a sea rrial to Jamaica, as was required by the Longitude Act's provisions. Although H 4 seemed to have performed exceptionally well, H arrison and rhe commissioners disagreed over the results and a seco nd sea trial was ordered. While H arrison wo rked away at his mechanical clocks, wo rk on the "celesrialclock" methods continued in parallel. In 173 1, John H adley, vice pres ident of the Royal Society, presented his ideas for a new

navigational instrument. The Hadley reflecting quadrant- later called the octan t, the forerunner of the modern sextant-enabled sailors to more accurately measure the angles of the sun, moo n, and stars relative to the earth . Building on the work of others, in the early 17 50s German as tronomer Tobias M ayer devised a set of astronomical tables that co uld be used for finding longitude at sea using rh e lunar-distance method. Everything cam e to a h ead in 1763 when the C ommissioners, now known as the Board of Longitude, organized trials of three methods fo r findin g longitude. There was a lot riding on the outcome, prize money to the rune of a king's ransom, nor to mention the prestige that would go along w ith having been declared the winner. Mayer's as tronomical tables, H arrison's H 4, and a "marine chair" invented by Christopher Irwin for the observation of Jupiter's moons were all put to the rest on a rransArlanric passage to Barbados. Only Harrison's H 4 and M ayer's lunar rabies proved successful, and in 1765 a new Longitude Act recognized their work and rewarded them , along with Leonhard Euler, who also worked on longitude-finding using the Moon .

Making It Work Discovering a reliable method to accurately determine longitude at sea was only the first part of the story. For mariners to benefit from the effort, the solution had to be able to be reproduced on a wide scale. The tools had to be affordable, their use easily mastered by mariners, and the supporting materials-astronomical rabies and insrrucrions-had to be accurate, complete, and available.