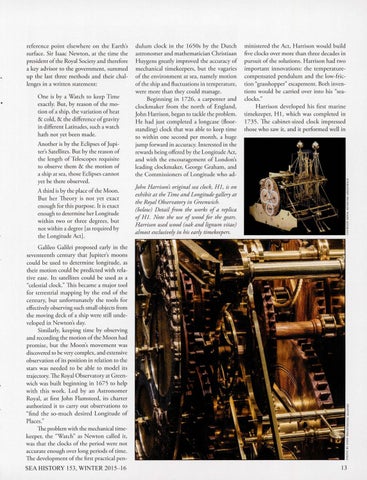 reference point elsewhere on the Earth's surface. Sir Isaac Newton, at the time the president of the Royal Society and therefore a key advisor to the government, summed up the last three methods and their challenges in a written statement: One is by a Watch to keep Time exactly. But, by reason of the motion of a ship, the variation of heat & cold, & the difference of gravity in different Latitudes, such a watch hath not yet been made. Another is by the Eclipses of Jupiter's Satellites. But by the reason of the length of Telescopes requisite to observe them & the motion of a ship at sea, those Ecl ipses cannot yet be there observed. A third is by the place of the Moon. But h er Theory is not yet exact enough for this purpose. It is exact enough to determine her Longitude within two or three degrees, but not within a degree [as required by the Longitude Act].

dulum clock in the 1650s by the Dutch astronomer and mathematician Christiaan Huygens greatly improved the accuracy of mechanical timekeepers, but the vagaries of the environment at sea, namely motion of the ship and fluctuations in temperature, were more than they could manage. Beginning in 1726, a carpenter and clockmaker from the north of England, John Harrison, began to tackle the problem. H e had just completed a longcase (floorstanding) clock that was able to keep time to within one second per month, a huge jump forward in accuracy. Interested in the rewards being offered by the Longitude Act, and with the encouragement of London's leading clockmaker, George Graham, and the Commissioners of Longitude who ad-

ministered the Act, Harrison wo uld build five clocks over more than three decades in pursuit of the solutions. Harrison had two important innovations: the temperaturecompensated pendulum and the low-friction "grasshopper" escapement. Both inventions wo uld be carried over into his "seaclocks." H arrison developed his first marine timekeeper, H 1, which was completed in 1735. The cabinet-sized clock impressed those who saw it, and it performed well in

john Harrison's original sea clock, HJ, is on exhibit at the Time and Longitude gallery at the Royal Observatory in Greenwich. (below) Detail from the works of a replica of H 1. Note the use of wood for the gears. Harrison used wood (oak and lignum vitae) almost exclusively in his early timekeepers.

Galileo Galilei proposed early in the seventeenth century that Jupiter's moons could be used to determine longitude, as their motion could be predicted with relative ease. Its satellites could be used as a "celestial clock." This became a major tool for terrestrial mapping by the end of the century, but unfortunately the tools for effectively observing such small objects from the moving deck of a ship were still undeveloped in Newton's day. Similarly, keeping time by observing and recording the motion of the Moon had promise, but the Moon's movement was discovered to be very complex, and extensive observation of its position in relation to the stars was needed to be able to model its trajectory. The Royal Observatory at Greenwich was built beginning in 1675 to help with this work. Led by an Astronomer Royal, at first John Flamsteed, its charter authorized it to carry out observations to "find the so-m uch desired Longitude of Places." The problem with the mechanical timekeeper, the "Watch" as Newton called it, was that the clocks of the period were not accurate enough over long periods of time. The development of the first practical pen-