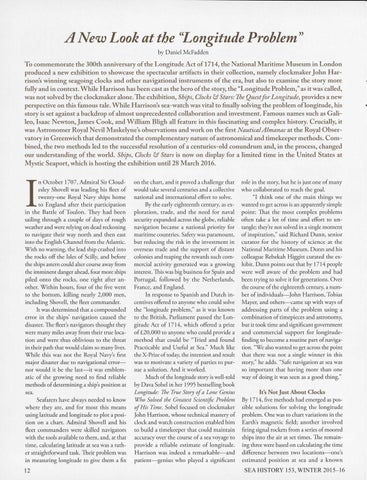 A New Look at the "Longitude Problem" by Daniel McFadden

To commemorate the 300th anniversary of the Longitude Act of 1714, the National Maritime Museum in London produced a new exhibition to showcase the spectacular artifacts in their collection, namely clockmaker John Harrison's winning seagoing clocks and other navigational instruments of the era, but also to examine the story more fully and in context. While Harrison has been cast as the hero of the story, the "Longitude Problem," as it was called, was not solved by the clockmaker alone. The exhibition, Ships, Clocks & Stars: The Questfor Longitude, provides a new perspective on this famous tale. While Harrison's sea-watch was vital to finally solving the problem oflongitude, his story is set against a backdrop of almost unprecedented collaboration and investment. Famous names such as Galileo, Isaac Newton, James Cook, and William Bligh all feature in this fascinating and complex history. Crucially, it was Astronomer Royal Nevil Maskelyne's observations and work on the first Nautical Almanac at the Royal Observatory in Greenwich that demonstrated the complementary nature of astronomical and timekeeper methods. Combined, the two methods led to the successful resolution of a centuries-old conundrum and, in the process, changed our understanding of the world. Ships, Clocks & Stars is now on display for a limited time in the United States at Mystic Seaport, which is hosting the exhibition until 28 March 2016. n October 1707, Admiral Sir C loudesley Shovel! was leading his Beet of twenty-one Royal Navy ships home to England after their participation in th e Barri e of Toulo n . They had been sailing through a couple of days of rough weather and were relying on dead reckoning to navigate their way north and then east into the English C hannel from the Atlantic. With no warning, the lead ship crashed into the rocks off the Isles of Sci lly, and befo re the ships astern could airer course away from the imminent danger ahead, four more ships piled onto the rocks, one right after another. Within hours, four of the five went to the bottom, killing nearly 2,000 men, including Shovell, the Beet commander. Ir was determined that a compounded error in rhe ships' navigation caused the disaster. The Beer's navigators thought they were m any miles away from their true location and were thus oblivious to the threat in their path that would claim so many lives. While this was no r the Royal Navy's first m ajor disaster due to navigational errornor would it be the last-it was emblematic of the growing need to find reliable m ethods of determining a ship's position at sea. Seafarers have always needed to know where they are, and for most this means using latitude and longitude to plot a position on a chart. Admiral Shovell and his Beet commanders were skilled navigators with the tools available to them, and, at that time, calculating latitude at sea was a rather straightforward task. Their problem was in measuring longitude to give them a fix

on the chart, and it proved a challenge that would take several centuries and a collective national and international effort to solve. By the early eighteenth century, as exploration , trade, and the need for naval securi ty expanded across the globe, reliable navigation becam e a national priority for maritime countries. Safety was paramount, bur reducing the risk in the investment in overseas trade and the support of distant colonies and reaping the rewards such commercial activity generated was a growing interest. This was big business for Spain and Portugal, followed by the Netherlands, France, and England. In response to Spanish and Dutch incentives offered to anyone who could solve the "longitude problem," as it was known to the British , Parliament passed the Longitude Act of 17 14, which offered a prize of ÂŁ20,000 to anyone who could provide a m ethod that could be "Tried and found Practicable and Useful at Sea." Much like the X-Prize of today, the intention and result was to motivate a variety of parties to pursue a solution. And it worked. Much of the longitude story is well-told by Dava Sobel in her 1995 bestselling book Longitude: The True Story of a Lone Genius Who Solved the Greatest Scientific Problem ofH is Time. Sobel focused on clockmaker John Harrison, whose technical mastery of clock and watch construction enabled him to build a timekeeper that could maintain accuracy over the course of a sea voyage to provide a reliable estimate of longitude. Harrison was indeed a remarkable-and patient-genius who played a significant

role in the story, bur he is just one of many who collaborated to reach the goal. "I think one of the main things we wanted to get across is an apparently simple point: Thar the most complex problems often take a lot of time and effort to untangle; they're not solved in a single moment of inspiration," said Richard Dunn, senior curator for the history of science at the National Maritime Museum. Dunn and his colleague Rebekah Higgitt curated the exhibit. Dunn points out that by 1714 people were well aware of the problem and had been trying to solve it for generations. Over the course of the eighteenth century, a number of individuals-John Harrison, Tobias Mayer, and others-came up with ways of addressing parts of the problem using a combination of timepieces and astronomy, bur it rook rime and significant government and commercial support for longitudefinding to become a routine part of navigation. "We also wanted to get across the point that there was not a single winner in this story," he adds. "Safe navigation at sea was so important that having more than one way of doing it was seen as a good thing."

It's Not Just About Clocks By 17 14, five methods had emerged as possible solutions for solving the longitude problem. One was to chart variations in the Earth's m agnetic field; another involved firin g signal rockets from a series of moored ships into the air at set times. The remaining three were based on calculating the time difference between two locations-one's estimated position at sea and a known