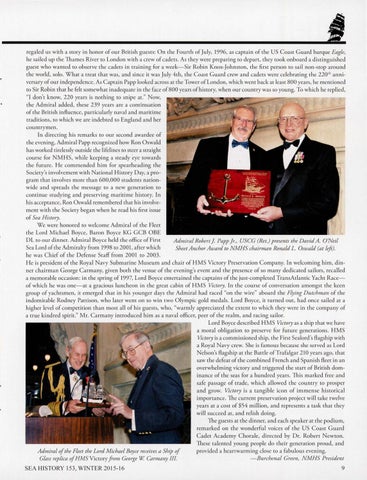 regaled us with a story in honor of our British guests: On the Fourth of]u ly, 1996, as captain of the US Coast Guard barque Eagle, he sai led up the Thames River to London with a crew of cadets. As they were preparing to depart, they took onboard a distinguished guest who wanted to observe the cadets in training for a week-Sir Robin Knox-Johnston, the first person to sail non-stop around the world, solo. What a treat that was, and since it was July 4th, the Coast Guard crew and cadets were celebrating the 220'h anniversary of our independence. As Captain Papp looked across at the Tower of London, which went back at least 800 years, he mentioned to Sir Robin that he felt somewhat inadequate in the face of800 years of history, when our country was so young. To which he replied, "I don't know, 220 years is nothing to snipe at." Now, the Admira l added, these 239 yea rs are a continuation of the British influence, particularly naval and maritime tradition s, to which we are indebted to England and her countrymen. In directing his remarks to our second awardee of the evening, Admiral Papp recognized how Ron Oswald h as worked tirelessly outside the lifelines to steer a straight course for NMHS, while keeping a steady Âˇeye towards the future. He commended him for spea rheading the Society's involvement with National History Day, a program that involves more than 600,000 students nationwide and spreads the message to a new generation to continue studying and preserving maritime history. In his acceptance, Ron Oswald remembered that his involvement with the Society began when he read his first issue of Sea History. We were honored to welcome Admiral of the Fleer the Lord M ichael Boyce, Baron Boyce KG GCB OBE DL to our dinner. Admiral Boyce held the office of First Admired Robert ]. Papp J r., USCG (Ret.) presents the David A. O'Neil Sea Lord of the Admiralty from 1998 to 2001, after which Sheet Anchor Award to NMH S chairman Ronald L. Oswald (at Left). he was C hief of the Defense Staff from 2001 to 2003. He is president of the Royal Navy Submarine Muse um and chair of HMS Victory Preservation Company. In welcoming him, dinner chairman George Carmany, given both the venue of the evening's event and the presence of so many dedicated sailors, recalled a memorable occasion: in the spring of 1997, Lord Boyce entertained the captains of the just-completed TransAdantic Yacht Raceof which he was one-at a gracious luncheon in the great cabin of HMS Victory. In the course of conversation amongst the keen group of yachtsmen, it emerged that in his yo unger days the Admiral had raced "on the wire" aboard the Flying Dutchman of the indomitable Rodney Pattison , who later went on to win two Olympic gold medals. Lord Boyce, it turned out, had once sailed at a higher level of competition than most all of his guests, who, "warmly appreciated the extent to which they were in the company of a true kindred spirit." Mr. Carmany introduced him as a naval officer, peer of rhe realm, and racing sa ilor. Lord Boyce described HMS Victory as a ship that we have a moral obligation to preserve for future generations. HMS Victory is a commissioned ship, the First Sealord 's flagship with a Royal Navy crew. She is famous because she served as Lord Nelson's flagship at the Battle of T rafalga r 210 yea rs ago, that saw rhe defeat of the combined French and Spanish fleet in an overwhelming victory and triggered the start of British dominance of the seas for a hundred yea rs. This marked free and safe passage of trade, which allowed the country to prosper and grow. Victory is a tangible icon of immense historical importance. The current preservatio n project will rake twelve yea rs at a cost of $54 million, and represents a task that they will succeed at, and relish doing. The guests at the dinner, and each speaker at the podium, remarked on the wonderful voices of the US Coast Guard Cadet Academy Chorale, directed by Dr. Robert Newton. These talented yo ung people do their generation proud, and provided a heartwa rming close to a fa bulous evening. Admiral of the Fleet the Lord Michael Boyce receives a Ship of -BurchenaL Green, NMHS President Glass replica ofHMS Victory from George W Carmany Ill SEA HISTORY 153 , WINTER 2015-16