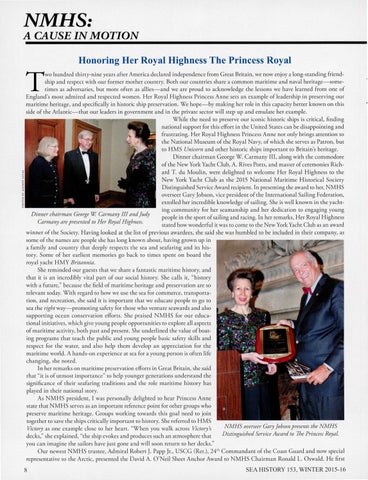 NMHS: A CAUSE IN MOTION Honoring Her Royal Highness The Princess Royal

wo hundred chirty-nine years after America declared independence from Greac Brirain, we now enjoy a long-sranding friendship and respecc with our former mother country. Boch our countries sh are a common maritime and naval heritage-sometimes as adversaries, bur more ofren as allies-a nd we are proud to acknowledge rhe lessons we have learned fro m one of England 's mosc admired and respected wo men. H er Royal Highness Princess Anne sets an example of leadership in preservin g our maritime heritage, and specifically in historic ship preservation. We hope-by making her role in this capacity ben er known on this side of the A tlantic- that our leaders in government and in rhe private sector will step up and emulate her example. W hile the need to preserve our iconic historic ships is critical, finding national support fo r this effort in the U nited States can be disappointing and frustrating. H er Royal Highness Princess Anne nor only brings an ention to rhe National M useum of the Royal Navy, of which she serves as Parron, bur to H MS Unicorn and other historic ships important to Britain's heritage. Dinner chairman G eorge W . Carmany III, along with the commodore of rhe New York Yacht C lub, A. Rives Pons, and master of ceremonies Richard T. du Moulin, were delighted to welcome H er Royal H ighness to the N ew York Yacht C lub as rhe 2015 National M aritime Historical Society Distinguished Service Award recipient. In presenting the award to her, NMH S overseer G ary Jobson, vice president of the International Sailing Federation, extolled her incredible knowledge of sailing. She is well known in the yachting community for her seamanship and her dedication to engagin g young Dinner chairman George W Carmany III and Judy people in the sport of saili ng and racing. In her remarks, H er Royal Highness Carmany are presented to Her Royal Highness. stared how wonderful it was to come to rhe New York Yacht Club as an award winner of the Society. H aving looked at the li st of previous awardees, she said she was humbled to be included in their company, as some of the names are people she has long known about, having grow n up in a fa mily and coum ry chac deeply respects the sea and seafaring and its histo ry. Some of her earliest memories go back to rimes spent on board the royal yach c H MY Britannia. She reminded our gues ts rhar we share a fa m as ric maritime history, and rhar it is an incredibly viral part of our social history. She calls it, "history with a future," because rhe field of maritim e heritage and preservation are so relevant today. W ith regard to how we use rhe sea fo r com me rce, transportation, and recreation, she said it is important that we educate people to go to sea the right way-promoting safety for those w ho venture seawards and also supporting ocea n conserva tion efforts. She praised N MHS fo r our educational initiatives, which give youn g people opportunities to explore all aspects of maritime activity, both pas t and present. She underlined the value of boating programs rh at reach the public and yo ung people basic safety ski lls and respect for rhe wa ter, and also help them develop an appreciation for the maritime wo rld. A hands-o n experience at sea for a young person is often life changing, she noced . In her remarks on maritime preservation efforts in Grear Britain, she said thac "it is of utmos t importance" to help yo unger generations understand the significance of cheir seafaring traditions and the role maritime history has played in their nacional story. As N MHS preside m , I was personally deli ghted to hear Princess A nne scace char NMHS serves as an importanc reference point for other groups who preserve maritime heritage. Gro ups wo rking towards this goal need to join together to save the ships criti cally important to history. She referred to HMS NMHS overseer Gary Jobson presents the NMHS Victory as one example close to her hea rt. "When you walk across Victory's Distinguished Service Award to 7he Princess Royal. decks," she explained, "the ship evokes and produces such an atmosphere rhar you can im agine the sa ilors have just gone and will soon return to her decks." Our newes t N MHS trustee, Admiral Robert J. Papp Jr., USCG (Rer.), 24'h Commandant of the Coas t Guard and now special representative to the Arctic, presented the David A. O 'Neil Sheer A nchor Awa rd to NMHS C hairman Ronald L. Oswald. H e first