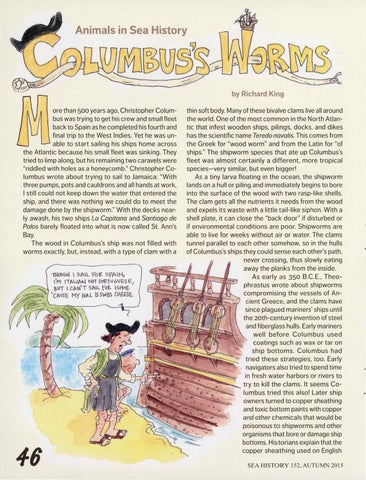 by Richard King ore than 500 years ago, Christopher Columbus was trying to get his crew and small fleet back to Spain as he completed his fourth and final trip to the West Indies. Yet he was unable to start sailing his ships home across the Atlantic because his small fleet was sinking. They tried to limp along, but his remaining two caravels were &quot;riddled with holes as a honeycomb.&quot; Christopher Columbus wrote about trying to sail to Jamaica: &quot;With three pumps, pots and cauldrons and all hands at work, I still could not keep down the water that entered the ship, and there was nothing we could do to meet the damage done by the shipworm.&quot; With the decks nearly awash , his two ships La Capitano and Santiago de Palos barely floated into what is now called St. Ann&#39;s Bay. The wood in Columbus&#39;s ship was not filled with worms exactly, but, instead, with a type of clam with a

thin soft body. Many of these bivalve clams live all around the world . One of the most common in the North Atlantic that infest wooden ships, pilings, docks, and dikes has the scientific name Teredo nova/is. This comes from the Greek for &quot;wood worm &quot; and from the Latin for &quot;of ships.&quot; The shipworm species that ate up Columbus&#39;s fleet was almost certainly a different, more tropical species-very similar, but even bigger! As a tiny larva floating in the ocean , the shipworm lands on a hull or piling and immediately begins to bore into the surface of the wood with two rasp-like shells. The clam gets all the nutrients it needs from the wood and expels its waste with a little tail-like siphon . With a shell plate, it can close the &quot;back door&quot; if disturbed or if environmental conditions are poor. Shipworms are able to live for weeks without air or water. The clams