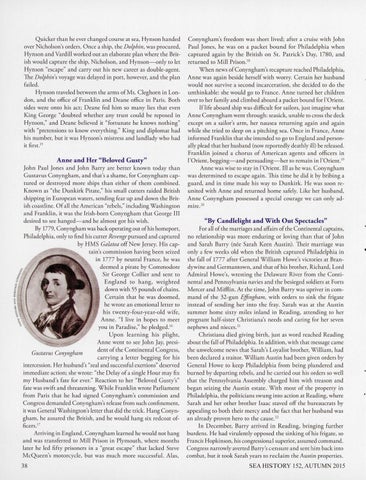 Quicker than he ever changed course at sea, Hynson handed over Nicholson&#39;s orders. Once a ship, the Dolphin, was procured, Hynson and Vardill worked our an elaborate plan where the British would capture the ship, Nicholson, and Hynson-only ro let Hynson &quot;escape&quot; and carry our his new career as double-agent. The Dolphin&#39;s voyage was delayed in port, however, and the plan failed. Hynson traveled between rhe arms of Ms. Cleghorn in London, and the office of Franklin and Deane office in Paris. Both sides were onto his act; Deane fed him so many lies that even King George &quot;doubted whether any trust could be reposed in Hynson,&quot; and Deane believed it &quot;fortunate he knows nothing&quot; with &quot;pretensions to know everything.&quot; King and diplomat had his number, bur it was Hynson&#39;s mistress and landlady who had it first. 15

Anne and Her &quot;Beloved Gusty&quot; John Paul Jones and John Barry are better known today than Gustavus Conyngham, and that&#39;s a shame, for Conyngham captured or destroyed more ships than either of them combined. Known as &quot;the Dunkirk Pirate,&quot; his small cutters raided British shipping in European waters, sending fear up and down the British coastline. Of all the American &quot;rebels,&quot; including Washington and Franklin, it was the Irish-born Conyngham that George III desired to see hanged-and he almost got his wish. By 1779, Conyngham was back operating out of his homeport, Philadelphia, only to find his cutter Revenge pursued and captured by HMS Galatea off New Jersey. His captain&#39;s commission having been seized in 1777 by neutral France, he was deemed a pirate by Commodore Sir George Collier and sent to England to hang, weighted down with 55 pounds of chains. Certain rhar he was doomed, he wrote an emotional letter to his twenty-four-year-old wife, Anne. &quot;I live in hopes to meet you in Paradise,&quot; he pledged. 16 Upon learning his plight, Anne went to see John Jay, president of the Continental Congress, Gustavus Conyngham carrying a letter begging for his intercession. Her husband&#39;s &quot;zeal and successful exertions&quot; deserved immediate action; she wrote: &quot;the Delay of a single Hour may fix my Husband&#39;s fare for ever.&quot; Reaction to her &quot;Beloved Gusty&#39;s&quot; fare was swift and threatening. While Franklin wrote Parliament from Paris that he had signed Conyngham&#39;s commission and Congress demanded Conyngham&#39;s release from such confinement, it was General Washington&#39;s letter rhar did the trick. Hang Conyngham, he assured the British, and he would hang six redcoat officers. 17 Arriving in England, Conyngham learned he would not hang and was transferred to Mill Prison in Plymouth, where months later he led fifty prisoners in a &quot;great escape&quot; that lacked Steve McQueen&#39;s motorcycle, but was much more successful. Alas,

Conyngham&#39;s freedom was short lived; after a cruise with John Paul Jones, he was on a packet bound for Philadelphia when captured again by the British on Sr. Patrick&#39;s Day, 1780, and returned to Mill Prison. 18 When news ofConyngham&#39;s recapture reached Philadelphia, Anne was again beside herself with worry. Certain her husband would not survive a second incarceration, she decided to do the unthinkable: she would go ro France. Anne turned her children over to her family and climbed aboard a packet bound for !&#39;Orient. If life aboard ship was difficult for sailors, just imagine what Anne Conyngham went through: seasick, unable to cross the deck except on a sailor&#39;s arm, her nausea returning again and again while she tried to sleep on a pitching sea. Once in France, Anne informed Franklin that she intended to go to England and personally plead that her husband (now reportedly deathly ill) be released. Franklin joined a chorus of American agents and officers in !&#39;Orient, begging-and persuading-her to remain in l&#39;Orient. 19 Anne was wise to stay in !&#39;Orient. Ill as he was, Conyngham was determined to escape again. This time he did it by bribing a guard, and in rime made his way to Dunkirk. He was soon reunited with Anne and returned home safely. Like her husband, Anne Conyngham possessed a special courage we can only admire.20

&quot;By Candlelight and With Out Spectacles&quot; For all of the marriages and affairs of the Continental captains, no relationship was more enduring or loving than that of John and Sarah Barry (nee Sarah Keen Austin). Their marriage was only a few weeks old when the British captured Philadelphia in the fall of 1777 after General William Howe&#39;s victories at Brandywine and Germantown, and that of his brother, Richard, Lord Admiral Howe&#39;s, wresting the Delaware River from the Continental and Pennsylvania navies and the besieged soldiers at Forts Mercer and Miffiin. Ar the time, John Barry was upriver in command of the 32-gun Effingham, with orders to sink the frigate instead of sending her into the fray. Sarah was at the Austin summer home sixty miles inland in Reading, attending to her pregnant half-sister Christiana&#39;s needs and caring for her seven nephews and nieces. 21 Christiana died giving birth, just as word reached Reading about the fall of Philadelphia. In addition, with that message came the unwelcome news that Sarah &#39;s Loyalist brother, William, had been declared a traitor. William Austin had been given orders by General Howe to keep Philadelphia from being plundered and burned by departing rebels, and he carried out his orders so well that the Pennsylvania Assembly charged him with treason and began seizing the Austin estate. With most of the property in Philadelphia, the politicians swung into action at Reading, where Sarah and her other brother Isaac staved off the bureaucrats by appealing to both their mercy and the fact that her husband was an already proven hero to the cause. 22 In December, Barry arrived in Reading, bringing further burdens. He had virulenrly opposed the sinking of his frigate, so Francis Hopkinson, his congressional superior, assumed command. Congress narrowly averred Barry&#39;s ciensure and sent him back into combat, bur it rook Sarah years to rÂˇeclaim the Austin properties.