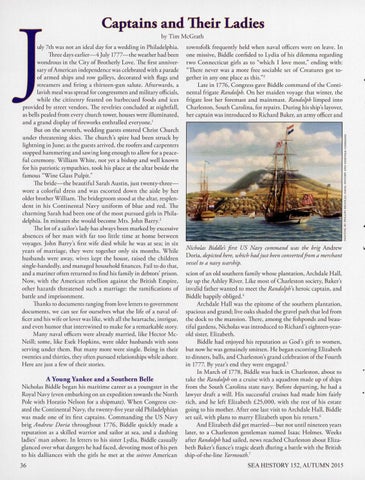 Captains and Their Ladies by Tim McGrath uly 7th was not an ideal day for a wedding in Philadelphia. Three days earlier-4July1777-the weather had been i wondrous in the City of Brotherly Love. The first anniver, sary of American independence was celebrated with a parade of armed ships and row galleys, decorated with flags and streamers and firing a thirteen-gun salute. Afterwards, a lavish meal was spread for congressmen and military officials, while the citizenry feasted on barbecued foods and ices provided by street vendors. The revelries concluded at nightfall, as bells pealed from every church tower, houses were illuminated, and a grand display of fireworks enthralled everyone. 1 But on the seventh, wedding guests entered Christ Church under threatening skies. The church&#39;s spire had been struck by lightning in June; as the guests arrived, the roofers and carpenters stopped hammering and sawing long enough to allow for a peaceful ceremony. William White, not yet a bishop and well known for his patriotic sympathies, took his place at the altar beside the famous &quot;Wi ne Glass Pulpit.&quot; The bride-the beautiful Sarah Austin, just twenty-threewore a colorful dress and was escorted down the aisle by her older brother William. The bridegroom stood at the altar, resplendent in his Continental Navy uniform of blue and red. The charming Sarah had been one of the most pursued girls in Philadelphia . In minutes she would become Mrs. John Barry. 2 The lot of a sailor&#39;s lady has always been marked by excessive absences of her man with far too little time at home between voyages. John Barry&#39;s first wife died while he was at sea; in six years of marriage, they were together only six months. While husbands were away, wives kept the house, raised the children single-handedly, and managed household finances . Fail to do that, and a mariner often returned to find his family in debtors&#39; prison. Now, with the American rebellion against the British Empire, other hazards threatened such a marriage: the ramifications of battle and imprisonment. Thanks to documents ranging from love letters to government documents, we can see for ourselves what the life of a naval officer and his wife or lover was like, with all the heartache, intrigue, and even humor that intertwined to make for a remarkable story. Many naval officers were already married, like Hector McNeil!; some, like Esek Hopkins, were older husbands with sons serving under them. But many more were single. Being in their twenties and thirties, they often pursued relationships while ashore. Here are just a few of their stories.

A Young Yankee and a Southern Belle Nicholas Biddle began his maritime career as a youngster in the Royal Navy (even embarking on an expedition towards the North Pole with Horatio Nelson for a shipmate) . When Congress created the Continental Navy, the twenty-five year old Philadelphian was made one of its first captains. Commanding the US Navy brig Andrew Doria throughout 1776, Biddle quickly made a reputation as a skilled warrior and sailor at sea, and a dashing ladies&#39; man ashore. In letters to his sister Lydia, Biddle casually glanced over what dangers he had faced, devoting most of his pen to his dalliances with the girls he met at the soirees American

townsfolk frequently held when naval officers were on leave. In one missive, Biddle confided to Lydia of his dilemma regarding two Connecticut girls as to &quot;which I love most,&quot; ending with: &quot;There never was a more free sociable set of Creatures got together in any one place as this .&quot; 3 Late in 1776, Congress gave Biddle command of the Continental frigate Randolph. On her maiden voyage that winter, the frigate lost her foremast and mainmast. Randolph limped into Charleston, South Carolina, for repairs . During his ship&#39;s layover, her captain was introduced to Richard Baker, an army officer and

Nicholas Biddle&#39;s first US Navy command was the brig Andrew Doria, depicted here, which hadjust been convertedftom a merchant vessel to a navy warship.

scion of an old southern family whose plantation, Archdale Hall, lay up the Ashley River. Like most of Charleston society, Baker&#39;s invalid father wanted to meet the Randolph&#39;s heroic captain, and Biddle happily obliged. 4 Archdale Hall was the epitome of the southern plantation, spacious and grand; live oaks shaded the gravel path that led from the dock to the mansion. There, among the fishponds and beautiful gardens, Nicholas was introduced to Richard&#39;s eighteen-yea rold sister, Elizabeth. Biddle had enjoyed his reputation as God &#39;s gift to women, but now he was genuinely smitten. He began escorting Elizabeth to dinners, balls, and Charleston&#39;s grand celebration of the Fourth in 1777. By year&#39;s end they were engaged.5 In March of 1778, Biddle was back in Charleston, about to take the Randolph on a cruise with a squadron made up of ships from the South Carolina state navy. Before departing, he had a lawyer draft a will. His successful cruises had made him fairly rich, and he left Elizabeth ÂŁ25,000, with the rest of his estate going to his mother. After one last visit to Archdale Hall, Biddle set sail, with plans to marry Elizabeth upon his return. 6 And Elizabeth did get married-but nor until nineteen years later, to a Charleston gentleman named Isaac Holmes. Weeks after Randolph had sailed, news reached Charleston about Elizabeth Baker&#39;s fiance &#39;s tragic death dluring a battle with the British ship-of-the-line Yarmouth. 7 SEA HI~STORY 152, AUTUMN 2015