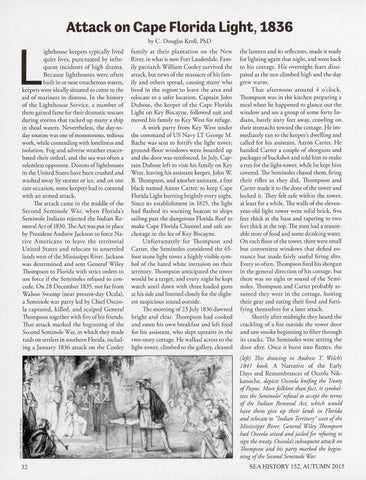 Attack on Cape Florida Light, 1836 by C. Douglas Kroll, PhD ighthouse keepers typically lived quiet lives, punctuated by infrequent incidents of high drama. Because lighthouses were often built in or near treacherous waters, keepers were ideally situated to come to the aid of mariners in distress. In the history of the Lighthouse Service, a number of them gained fame for their dramatic rescues during storms that racked up many a ship in shoal waters. Nevertheless, the day-today routine was one of monotonous, tedious work, while contending with loneliness and isolation. Fog and adverse weather exacerbated their ordeal, and the sea was often a relentless opponent. Dozens oflighthouses in the United States have been crushed and washed away by storms or ice, and on one rare occasion, some keepers had to contend with an armed attack. The attack came in the middle of the Second Seminole War, when Florida's Seminole Indians rejected the Indian Removal Act of 1830. The Act was put in place by President Andrew Jackson to force Native Americans to leave the territorial United States and relocate to unsettled lands west of the Mississippi River. Jackson was determined and sent General Wiley Thompson to Florida with strict orders to use force if the Seminoles refused to concede. On 28 December 1835, not far from Wahoo Swamp (near present-day Ocala), a Seminole war party led by Chief Osceola captured, killed, and scalped General Thompson together with five of his friends . That attack marked the beginning of the Second Seminole War, in which they made raids on settlers in southern Florida, including a January 1836 attack on the Cooley

family at their plantation on the New River, in what is now Fort Lauderdale. Family patriarch William Cooley survived the attack, bur news of the massacre of his family and others spread, causing many who lived in the region to leave the area and relocate to a safer location. Captain John Dubose, the keeper of the Cape Florida Light on Key Biscayne, followed suit and moved his family to Key West for refuge. A work party from Key West under the command of US Navy LT George M. Bache was sent to fortify the light tower; ground-floor windows were boarded up and the door was reinforced. In July, Captain Dubose left to visit his family on Key West, leaving his assistant keeper, John W. B. Thompson, and another assistant, a free black named Aaron Carter, to keep Cape Florida Light burning brightly every night. Since its establishment in 1825, the light had flashed its warning beacon to ships sailing past the dangerous Florida Reef to make Cape Florida Channel and safe anchorage in the lee of Key Biscayne. Unfortunately for Thompson and Carter, the Seminoles considered the 65foot stone light tower a highly visible symbol of the hated white intrusion on their territory. Thompson anticipated the tower would be a target, and every night he kept watch until dawn with three loaded guns at his side and listened closely for the slightest suspicious sound outside. The morning of23 July 1836 dawned bright and clear. Thompson had cooked and eaten his own breakfast and left food for his assistant, who slept upstairs in the two-story cottage. He walked across to the light-tower, climbed to the gallery, cleaned

the lantern and its reflectors, made it ready for lighting again that night, and went back to his cottage. His overnight fears dissipated as the sun climbed high and the day grew warm. That afternoon around 4 o'clock, Thompson was in the kitchen preparing a meal when he happened to glance out the window and see a group of some forty Indians, barely sixty feet away, crawling on their stomachs toward the cottage. Heimmediately ran to the keeper's dwelling and called for his assistant, Aaron Carter. He handed Carter a couple of shotguns and packages of buckshot and told him to make a run for the light-tower, while he kept him covered. The Seminoles chased them, firing their rifles as they did. Thompson and Carter made it to the door of the tower and locked it. They felt safe within the tower, at least for a while. The walls of the elevenyear-old light tower were solid brick, five feet thick at the base and tapering to two feet thick at the top. The men had a reasonable store of food and some drinking water. On each floor of the tower, there were small but convenient windows that defied entrance bur made fairly useful firing slits. Every so often, Thompson fired his shotgun in the general direction of his cottage, but there was no sight or sound of the Seminoles . Thompson and Carter probably assumed they were in the cottage, looting their gear and eating their food and fortifying themselves for a later attack. Shortly after midnight they heard the crackling of a fire outside the tower door and saw smoke beginning to filter through its cracks. The Seminoles were setting the door afire. Once it burst into flames, the (left) This drawing in Andrew T Welch's 1841 book, A Narrative of the Early Days and Remembrances of Oceola Nikkanoche, depicts Osceola knifing the Treaty of Payne. More folklore than fact, it symbolizes the Seminoles' refusal to accept the terms of the Indian Removal Act, which would have them give up their lands in Florida and relocate to "Indian Territory" west of the Mississippi River. General Wiley Thompson had Osceola seized and jailed for refusing to sign the treaty. Osceola's subsequent attack on Thompson and his party marked the beginning ofthe Second Seminole ~r.