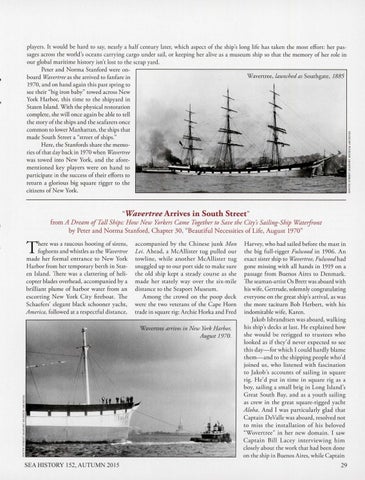 players. It would be hard to say, nearly a half century later, which aspect of the ship&#39;s long life has taken the most effort: her passages across the world&#39;s oceans carrying cargo under sail, or keeping her alive as a museum ship so that the memory of her role in our global maritime history isn&#39;t lost to the scrap yard. Peter and Norma Stanford were onWavertree, launched as Southgate, 1885 board Wavertree as she arrived to fanfare in 1970, and on hand again this past spring to see their &quot;big iron baby&quot; towed across New York Harbor, this time to the shipyard in Staten Island. With the physical restoration complete, she will once again be able to tell the story of the ships and the seafarers once common to lower Manhattan, the ships that made South Street a &quot;street of ships.&quot; Here, the Stanfords share the memories of that day back in 1970 when Wavertree was towed into New York, and the aforementioned key players were on hand to participate in the success of their efforts to return a glorious big square rigger to the citizens of New York.

&quot;Wavertree Arrives in South Street&quot; from A Dream of Tall Ships: How New Yorkers Came Together to Save the City&#39;s Sailing-Ship Waterfront by Peter and Norma Stanford, Chapter 30, &quot;Beautiful Necessities of Life, August 1970&quot;

here was a raucous hooting of sirens, foghorns and whistles as the Wavertree made her formal entrance to New York H arbor from her temporary berth in Staten Island. There was a clattering of helicopter blades overhead, accompanied by a brilliant plume of harbor water from an escorting New York City fireboat. The Schaefers&#39; elegant black schooner yacht, America, followed at a respectful distance,

accompanied by the Chinese junk Mon Lei. Ahead, a McAllister tug pulled our towline, while another McAllister tug snuggled up to our port side to make sure the old ship kept a steady course as she made her stately way over the six-mile distance to the Seaport Museum . Among the crowd on the poop deck were the two veterans of the Cape Horn trade in square rig: Archie Horka and Fred Wavertree arrives in New York Harbo r, August 197 0.

H arvey, who had sailed before the mast in the big full-rigger Fulwood in 1906. An exact sister ship to Wavertree, Fulwood had gone missing with all hands in 1919 on a passage from Buenos Aires to Denmark. The seaman-artist Os Brett was aboard with his wife, Gertrude, solemnly congratulating everyone on the great ship&#39;s arrival, as was the more taciturn Bob Herbert, with his indomitable wife, Karen. Jakob Isbrandtsen was aboard, walking his ship&#39;s decks at last. He explained how she would be rerigged to trustees who looked as if they&#39;d never expected to see this day-for which I could hardly blame them-and to the shipping people who&#39; d joined us, who listened with fascination to Jakob &#39;s accounts of sailing in square rig. He&#39;d put in time in square rig as a boy, sailing a small brig in Long Island &#39;s Great South Bay, and as a youth sailing as crew in the great square-rigged yacht Aloha. And I was particularly glad that Captain DeValle was aboard, resolved not to miss the installation of his beloved &quot;Wovertree&quot; in her new domain. I saw Captain Bill Lacey interviewing him closely about the work that had been done on the ship in Buenos Aires, while Captain