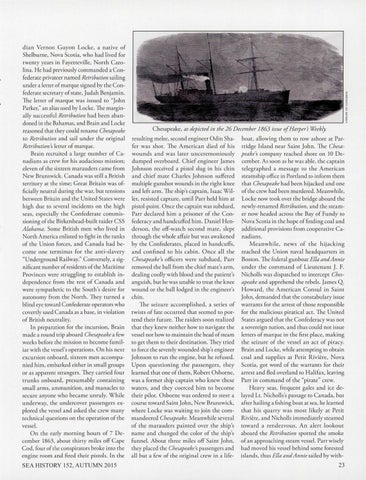 dian Vernon Guyon Locke, a native of Shelburne, Nova Scotia, who had lived for twenty years in Fayetteville, North Carolina. He had previously commanded a Confederate privateer named Retribution sailing under a letter of marque signed by the Confederate secretary of state, Judah Benjamin. The letter of marque was issued to &quot;John Parker,&quot; an alias used by Locke. The marginally successful Retribution had been abandoned in the Bahamas, and Brain and Locke reasoned that they could rename Chesapeake to Retribution and sail under the original Retribution&#39;s letter of marque. Brain recruited a large number of Canadians as crew for his audacious mission; eleven of the sixteen marauders came from New Brunswick. Canada was sti ll a British territory at the time; Great Britain was officially neutral during the war, but tensions between Britain and the United States were high due to several incidents on the high seas, especially the Confederate commissioning of the Birkenhead-built raider CSS Alabama. Some British men who lived in N orrh America enlisted to fight in the ranks of the Union forces, and Canada had become one terminus for the anti-slavery &quot;Underground Railway.&quot; Conversely, a significant number of residents of the Maritime Provinces were struggling to establish independence from the rest of Canada and were sympathetic to the South &#39;s desire for autonomy from the North. They turned a blind eye toward Confederate operators who covertly used Canada as a base, in violation of British neutrality. In preparation for the incursion, Brain made a round trip aboard Chesapeake a few weeks before the mission to become familiar with the vessel&#39;s operations. On his next excursion onboard, sixteen men accompanied him, embarked either in small groups or as apparent strangers. They carried four trunks onboard, pres umably containing small arms, ammunition, and manacles to secure anyone who became unruly. While underway, the undercover passengers explored the vessel and asked the crew many technical questions on the operation of the vessel. On the early morning hours of 7 December 1863, about thirty miles off Cape Cod, four of the conspirators broke into the engine room and fired their pistols. In the SEA HISTORY 152, AUTUMN 2015

Chesapeake, as depicted in the 26 December 1863 issue ofHarper&#39;s Weekly. resulting melee, second engineer Odin Shafer was shot. The American died of his wound s and was later unceremoniously dumped overboard. Chief engineer James Johnson received a pistol slug in his chin and chief mate Charles Johnson suffered multiple gunshot wounds in the right knee and lefr arm. The ship&#39;s captai n, Isaac W illet, resisted capture, until Parr held him at pistol-point. Once the capta in was subdued, Parr declared him a prisoner of the Confederacy and handcuffed him. Daniel Henderson, the off-watch second mate, slept through the whole affair but was awakened by the Confederates, placed in handcuffs, and confined to his cabin. Once all the Chesapeake&#39;s officers were subdued, Parr removed the ball from the chief mate&#39;s arm, dealing coolly with blood and the patient&#39;s anguish, but he was unable to treat the knee wound or the ball lodged in the engineer&#39;s chin . The seizure accomplished, a series of twists of fate occurred that seemed to portend their future. The raiders soon realized that they knew neither how to navigate the vessel nor how to maintain the head of steam to get them to their destination. They tried to force the severely wounded ship&#39;s engineer Johnson to run the engine, but he refused. Upon questioning the passengers, they learned that one of them, Robert Osborne, was a former ship captain who knew these waters, and they coerced him to become their pilot. Osborne was ordered to steer a course toward Saint John, New Brunswick, where Locke was waiting to join the commandeered Chesapeake. Meanwhile several of the marauders painted over the ship&#39;s name and changed the color of the ship&#39;s funne l. About three miles off Saint John, they placed the Chesapeake&#39;s passengers and all but a few of the original crew in a life-

boat, allowing them to row ashore at Partridge Island near Saint John. The Chesapeake&#39;s company reached shore on 10 December. As soon as he was able, the captain telegraphed a message to the American steamship office in Portland to inform them that Chesapeake had been hijacked and one of the crew had been murdered. Meanwhile, Locke now took over the bridge aboard the newly-renamed Retribution, and the steamer now headed across the Bay of Fundy to Nova Scotia in the hope of finding coal and additional provisions from cooperative Canadians. Meanwhile, news of the hijacking reached the Union naval headquarters in Boston. The federal gunboat Ella andAnnie under the command of Lieutenant J. F. Nicholls was dispatched to intercept Chesapeake and apprehend the rebels. James Q Howard, the American Consul in Saint John, demanded that the constabulary issue warrants for the arrest of those responsible for the malicious piratical act. The United States argued that the Confederacy was not a sovereign nation, and thus could not issue letters of marque in the first place, making the seizure of the vessel an act of piracy. Brain and Locke, while attempting to obtain coal and supplies at Petit Riviere, Nova Scotia, got word of the warrants for their arrest and fled overland to Halifax, leaving Parr in command of the &quot;pirate&quot; crew. Heavy seas, frequent gales and ice delayed Lr. Nicholls&#39;s passage ro Canada, but after hailing a fishing boat at sea, he learned that his quarry was most likely at Petit Riviere, and Nicholls immediately steamed toward a rendezvous . An alert lookout aboard the Retribution spotted the smoke of an approaching steam vessel. Parr wisely had moved his vessel behind some forested islands, thus Ella andAnnie sailed by with-