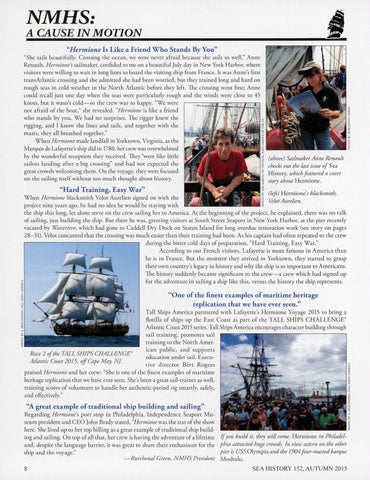 A CAUSE IN MOTION &quot;Hermione Is Like a Friend Who Stands By You&quot; &quot;She sails beautifully. Crossing the ocean, we were never afraid because she sai ls so well,&quot; Anne Renault, Hermione&#39;s sailmaker, confided to me on a beautiful July day in New York Harbor, where visitors were wi lling to wait in long lines to board the visiting ship from France. It was Anne&#39;s first transAtlantic crossing and she admitted she had been worried, but they trained long and hard on rough seas in cold weather in the North Atlantic before they left. The crossing went fine; Anne could recall just one day when the seas were particularly rough and the winds were close to 45 knots, but it wasn&#39;t cold-so the crew was so happy. &quot;We were not afraid of the boat,&quot; she revealed. &quot;Hermione is like a friend who stands by you. We had no surprises. The rigger knew the rigging, and I know the lines and sails, and together with the masts, they all breathed together.&quot; When Hermione made landfall in Yorktown, Virginia, as the Marquis de Lafayette&#39;s ship did in 1780, her crew was overwhelmed by the wonderful reception they received. They &quot;were like little &#39; &#39; sailors landing after a big crossing&quot; and had not expected the great crowds welcoming them. On the voyage, they were focused on the sailin g itself witho ut too much thought abo ut history.

(above) Sailmaker Anne Renault checks out the last issue of Sea History, which featured a cover story about Hermione.

(left) Hermione&#39;s blacksmith, When Hermione blacksmith Velor Aurelien signed on with the Velot Aurelien. project nine years ago, he had no idea he would be staying with the ship this long, let alone serve on the crew sailing her to America. At the beginning of the project, he explained, there was no talk of sailing, just building the ship. But there he was, greeting visitors at South Street Seaport in New York Harbor, at the pier recently vacated by Wavertree, which had gone to Caddell Dry Dock on Staten Island for long overdue restoration work (see story on pages 28-31). Velor concurred that the crossing was much easier than their training had been. As his captain had often repeated to the crew during the bitter cold days of preparation, &quot;Hard Training, Easy War.&quot; According to our French visitors, Lafayette is more famous in America than he is in France. But the moment they arrived in Yorktown, they started to grasp their own country&#39;s legacy in history and why the ship is so important to Americans. The history suddenly became significant to the crew-a crew which had signed up for the adventure in sailing a ship like this, versus the history the ship represents.

&quot;A great example of traditional ship building and sailing&quot; Regarding Hermione&#39;s port stop in Philadelphia, Independence Seaport Museum president and CEO John Brady stated, &quot;Hermione was the star of the show here. She lived up to her top billing as a great example of traditional ship building and sailing. On top of all that, her crew is having the adventure of a lifetime Ifyou build it, they will come. Hermione in Philadeland, despite the language barrier, it was great to share their enthusiasm for the phia attracted huge crowds. In view astern on the other pier is USS O lympia and the 1904four-masted barque ship and the voyage.&quot; -Burchenal Green, NMHS President Moshulu.