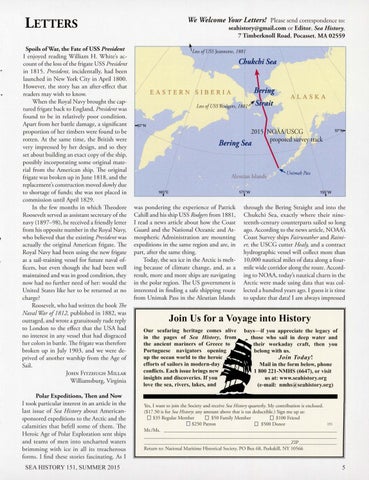 Spoils of War, the Fate of USS President I enjoyed reading William H . White's account of the loss of the frigate USS President in 1815 . President, incidentally, had been launched in New York City in April 1800. However, the story has an after-effect that readers may wish to know. When the Royal Navy brought the captured frigate back to England, President was found to be in relatively poor condition. Apart from her battle damage, a significant proportion of her timbers were found to be rotten. At the same time, the British were very impressed by her design, and so they set about building an exact copy of the ship, possib ly incorporating some original material from the American ship. The original frigate was broken up in June 1818, and the replacement's construction moved slowly due to shortage of funds; she was not placed in commission until April 1829. In the few months in which Theodore Roosevelt served as assistant secretary of the navy (1897-98), he received a friendly letter from his opposite number in the Royal Navy, who believed that the existing President was actually the original American frigate. The Royal Navy had been using the new frigate as a sail-training vessel for future naval officers, but even though she had been well maintained and was in good condition, they now had no further need of her: would the United States like her to be returned at no charge? Roosevelt, who had written the book 1he Naval War of 1812, published in 1882, was outraged, and wrote a gratuitously rude reply to London to the effect that the USA had no interest in any vessel that had disgraced her colors in battle. The frigate was therefo re broken up in July 1903, and we were deprived of another warship from the Age of Sail. JOHN FITZHUGH MILLAR

was pondering the experience of Patrick Cahill and his ship USS Rodgers from 1881 , I read a news article about how the Coast Guard and the National Oceanic and Atmospheric Administration are mounting expeditions in the same region and are, in part, after the same thing. Today, the sea ice in the Arctic is melting because of climate change, and, as a result, more and more ships are navigating in the polar region. The US government is interested in finding a safe shipping route from Unimak Pass in the Aleutian Islands

through the Bering Straight and into the Chukchi Sea, exactly where their nineteenth-century counterparts sailed so long ago. According to the news article, NOAA's Coast Survey ships Fairweather and Rainier, the USCG cutter Healy, and a contract hydrographic vessel will collect more than 10,000 nautical miles of data along a fourmile wide corridor along the route. According to NOAA, today's nautical charts in the Arctic were made using data that was collected a hundred years ago. I guess it is time to update that data! I am always impressed

bays- if you appreciate the legacy of those who sail in deep water and their workaday craft, then you belong with us.

Polar Expeditions, Then and Now I took particular interest in an article in the last issue of Sea History about Americansponsored expeditions to the Arctic and the calamities that befell some of them. The Heroic Age of Polar Exploration sent ships and teams of men into uncharted waters brimming with ice in all its treacherous forms. I find these stories fascinating. As I