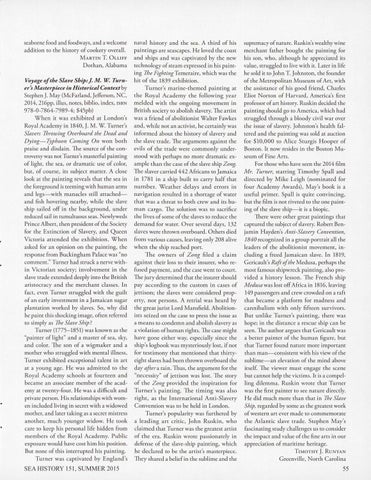 seaborne food and foodways, and a welcome addition to the history of cookery overall. MARTIN T. OLLIFF

Voyage ofthe Slave Ship: J M. W. Turner's Masterpiece in Historical Context by Stephen J. May (McFarland, Jefferson, NC, 2014, 216pp, illus, notes, biblio, index, ISBN 978-0-7864-7989-4; $45pb) When it was exhibited at London's Royal Academy in 1840, J.M. W. Turner's Slavers Throwing Overboard the Dead and Dying-Typhoon Coming On won both praise and disdain. The source of the controversy was not Turner's masterful painting of light, the sea, or dramatic use of color, but, of course, its subject matter. A close look at the painting reveals that the sea in the foreground is teeming with human arms and legs-with manacles still attachedand fish hovering nearby, while the slave ship sailed off in the background, under reduced sail in tumultuous seas. Newlyweds Prince Albert, then president of the Society for the Extinction of Slavery, and Queen Victoria attended the exhibition . When asked for an opinion on the painting, the response from Buckingham Palace was "no comment." Turner had struck a nerve within Victorian society; involvement in the slave trade extended deeply into the British aristocracy and the merchant classes. In fact, even Turn er struggled with the guilt of an early investment in a Jamaican sugar plantation worked by slaves. So, why did he paint this shocking image, often referred to simply as The Slave Ship? Turner (1775-1851) was known as the "painter of light" and a master of sea, sky, and color. The son of a wigmaker and a mother who struggled with mental illness, Turner exhibited exceptional talent in art at a young age. He was admitted to the Royal Academy schools at fourteen and became an associate member of the academy at twenty-four. He was a difficult and private person. His relationships with women included living in secret with a widowed mother, and later taking as a secret mistress another, much younger widow. He took care to keep his personal life hidden from members of the Royal Academy. Public exposure would have cost him his position. But none of this interrupted his painting. Turner was captivated by England's SEAHISTORY 151, SUMMER2015

naval history and the sea. A third of his paintings are seascapes. He loved the coast and ships and was captivated by the new technology of steam expressed in his painting The FightingTemeraire, which was the hit of the 1839 exhibition. Turner's marine-themed painting at the Royal Academy the following year melded with the ongoing movement in British society to abolish slavery. The artist was a friend of abolitionist Walter Fawkes and, while not an activist, he certainly was informed about the history of slavery and the slave trade. The arguments against the evils of the trade were common ly understood with perhaps no more dramatic example than the case of the slave ship Zang. The slaver carried 442 Africans to Jamaica in 1781 in a ship built to carry half that number. Weather delays and errors in navigation resulted in a shortage of water that was a threat to both crew and its human cargo. The solution was to sacrifice the lives of some of the slaves to reduce the demand for water. Over several days, 132 slaves were thrown overboard. Others died from various causes, leaving only 208 alive when the ship reached port. The owners of Zang filed a claim against their loss to their insurer, who refused payment, and the case went to court. The jury determined that the insurer should pay according to the custom in cases of jettison; the slaves were considered property, not persons. A retrial was heard by the great jurist Lord Mansfield. Abolitionists seized on the case to press the issue as a means to condemn and abolish slavery as a violation of human rights. The case might have gone either way, especially since the ship's logbook was mysteriously lost, if not for testimony that mentioned that thirtyeight slaves had been thrown overboard the day after a rain. Thus, the argument for the "necessity" of jettison was lost. The story of the Zang provided the inspiration for Turner's painting. The timing was also right, as the International Anti-Slavery Convention was to be held in London . Turner's popularity was furthered by a leading art critic, John Ruskin, who claimed that Turner was the greatest artist of the era. Ruskin wrote passionately in defense of the slave-ship painting, which he declared to be the artist's masterpiece. They shared a belief in the sublime and the

supremacy of nature. Ruskin's wealthy wine merchant father bought the painting for his son, who, although he appreciated its value, struggled to live with it. Later in life he sold it to John T. Johnston, the founder of the Metropolitan Museum of Art, with the assistance of his good friend, Charles Eliot Norton of Harvard, America's first professor of art history. Ruskin decided the painting should go to America, which had struggled through a bloody civil war over the issue of slavery. Johnston's health faltered and the painting was sold at auction for $10 ,000 to A lice Sturgis Hooper of Boston. It now resides in the Boston Museum of Fine Arts. For those who have seen the 2014 film Mr. Turner, starring Timothy Spall and directed by Mike Leigh (nominated for four Academy Awards), May's book is a useful primer. Spall is quite convincing, but the film is not riveted to the one painting of the slave ship-it is a biopic. There were other great paintings that captured the subject of slavery. Robert Benjamin Hayden's Anti-Slavery Convention, 1840 recognized in a group portrait all the leaders of the abolitionist movement, including a freed Jamaican slave. In 1819, Gericault's Raft ofthe Medusa, perhaps the most famous shipwreck painting, also provided a history lesson. The French ship Medusa was lost off Africa in 1816, leaving 149 passengers and crew crowded on a raft that became a platform for madness and cannibalism with on ly fifteen survivors. But unlike Turner's painting, there was hope; in the distance a rescue ship can be seen. The author argues that Gericault was a better painter of the human figure, but that Turner found nature more important than man-consistent with his view of the sublime-an elevation of the mind above itself. The viewer must engage the scene but cannot help the victims. It is a compelling dilemma. Ruskin wrote that Turner was the first painter to see nature directly. He did much more than that in The Slave Ship, regarded by some as the greatest work of western art ever made to commemorate the Atlantic slave trade. Stephen May's fascinating study challenges us to consider the impact and value of the fine arts in our appreciation of maritime heritage. TIMOTHY