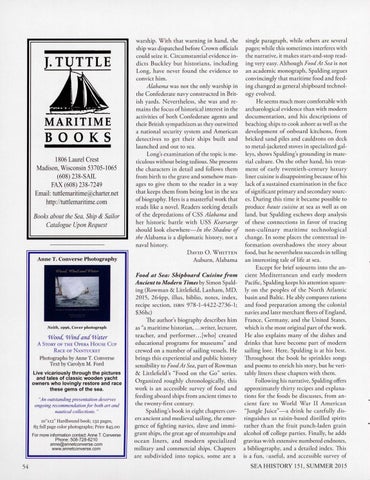 Books about the Sea, Ship & Sailor Catalogue Upon Request

warship. With that warning in hand, the ship was dispatched before Crown officials could seize it. Circumstantial evidence indicts Buckley bur historians, including Long, have never found the evidence to convict him. Alabama was not the only warship in the Confederate navy constructed in British yards. Nevertheless, she was and remains the focus of historical interest in the activities of both Confederate agents and their British sympathizers as they outwitted a national security system and American detectives to get their ships built and launched and out to sea. Long's examination of the topic is meticulous w ithout being tedious. She presents the characters in detail and fo llows them from birth to the grave and somehow manages to give them to the reader in a way that keeps them from being lost in the sea of biography. Hers is a masterful work that reads like a novel. Readers seeking details of the depredations of CSS Alabama and her historic battle with USS Kearsarge should look elsewhere-In the Shadow of the Alabama is a diplomatic history, not a naval history. DAVID 0. WHITTEN Auburn, Alabama

2015, 264pp, illus, biblio, notes, index, recipe section, ISB N 978-1-4422-2736-1; $36hc) The author's biography describes him as "a maritime historian, ...writer, lecturer, reacher, and performer. .. [who] created educational programs for museums" and crewed on a number of sailing vessels. He brings this experiential and public history sensibility to FoodAt Sea, part of Rowman & Littlefield 's "Food on the Go" series. Organized roughly chronologically, this work is an accessible survey of food and feeding aboard ships from ancient times to the twenty-fi rst century. Spalding's book in eight chapters covers ancient and medieval sailing, the emergence of fighting navies, slave and immigrant ships, the great age of steamships and ocean liners, and modern specialized milicary and commercial ships . Chapters are subdivided into topics , some are a

single paragraph, while others are several pages; while this sometimes interferes with the narrative, it makes start-and-stop reading very easy. Although Food At Sea is not an academic monograph, Spalding argues convincingly that maritime food and feeding changed as general,shipboard technology evolved. He seems much more comfortable with archaeological evidence than with modern documentation, and his descriptions of beaching ships to cook ashore as well as the development of onboard k itchens, from bricked sand piles and cauldrons on deck to metal-jacketed stoves in specialized galleys, shows Spalding's grounding in material culture. On the other hand, his treatment of early twentieth-century luxury liner cuisine is disappointing because of his lack of a sustained examination in the face of significant primary and secondary sources. D uring this time it became possible to produce haute cuisine at sea as wel l as on land, but Spalding eschews deep analysis of these connections in favor of tracing non-culinary maritime technological change. In some places the contextual information overshadows the story about food, but he nevertheless succeeds in telling an interesting tale of life at sea. Except for brief sojourns into the ancient Mediterranean and early modern Pacific, Spalding keeps his attention squarely on the peoples of the North A tlantic basin and Baltic. He ably compares rations and food preparation among the colonial navies and later merchant fleets of England, France, Germany, and the United States, which is the most original part of the work. He also explains many of the dishes and drinks that have become part of modern sailing lore. Here, Spalding is at his best. Throughout the book he sprinkles songs and poems to enrich his story, but he veritably litters these chapters with them. Following his narrative, Spalding offers approximately thirty recipes and explanations for the foods he discusses, from ancient fare to World War II American "Jungle Juice"-a drink he carefully distinguishes as raisin-based distilled spirits rather th:an the fruit punch-laden grain alcohol oif college parties. Finally, he adds gravitas writh extensive numbered endnotes, a bibliogrraphy, and a detailed index. This is a fun, 1 useful, and accessible survey of SEAIHISTORY 151, SUMMER 2015