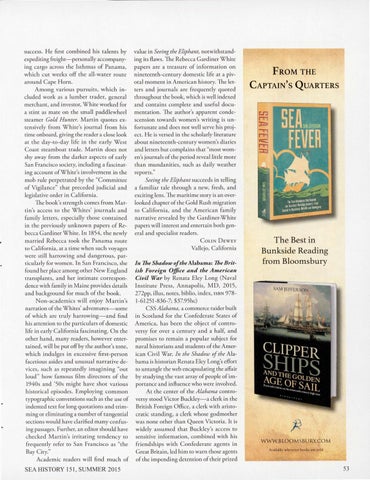 value in Seeing the Eliphant, notwithstanding its Aaws. The Rebecca Gardiner White p apers a re a t reas u re of info rmatio n o n nineteenth-century do mestic life at a pivotal moment in A merican history. The letters and jo urnals a re frequen tly quoted th ro ughout the book, wh ich is well indexed and contains complete and useful documentation. The author's appa rent condescension towa rds women's w riting is unfor tunate and does not well serve his project. H e is versed in the schola rl y literature about nineteenrh-century wo men's diaries a nd letters but complains that "most women's journals of the period reveal little m ore tha n mundani ties, such as daily weather repo rts." Seeing the Eliphant succeeds in telling a fa miliar tale through a new, fresh, and exci ting lens. The maritime story is an overlooked chap ter of the Gold Rush m igration to Califo rnia, and the American fa mily narrative revealed by the Gardiner-White papers will interest and entertain both general and specialist readers. COLIN D EWEY

In The Shadow ofthe Alabama: The British Foreign Office and the American Civil War by Renata Eley Long (Naval I ns titute Press, A nnap olis, M D , 201 5, 272pp, illus, notes, biblio, index, ISBN 9781-61251-836-7; $37.95hc) CSS A labama, a commerce raider built in Scotland fo r the Confederate States of A m erica, h as been the obj ect of controve rsy for over a century and a h alf, and promises to rem ain a popular subject for naval historians and students of the A merican C ivil War. In the Shadow of the Alabama is historia n Renata Eley Long's effort to untangle the web encapsulating the affair by studying the vas t array of people of importance and influence who were involved. At the center of the Alabama controversy stood Victor Buckley- a clerk in the British Foreign O ffi ce, a clerk w ith a ristocratic standing, a clerk whose godmother was none other than Queen Victoria. It is w idely ass umed th at Buckley's access to sensitive info rmation, combined with his frie ndships w ith Con federate age nts in Great Britain, led him to warn those agents of the impending detention of their prized

FROM THE CAPTAIN' s QUARTERS

The Best in Bunkside Reading from Blooms bury