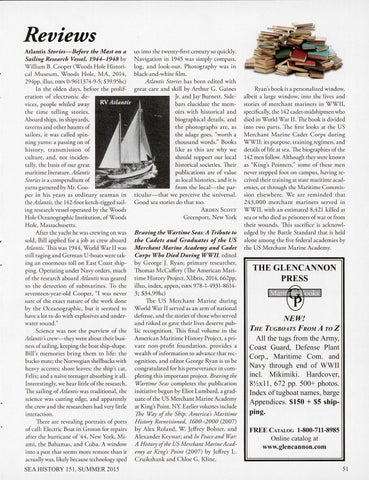 Reviews Atlantis Stories-Before the Mast on a Sailing Research Vessel, 1944-1948 by William B. Cooper (Woods Hole Historical Museum, Woods Hole, MA, 2014, 294pp, illus, ISBN 0-9611374-9-5 ; $39.95hc) In the olden days, before the proliferation of electronic devices, people whiled away the time telling stories. Aboard ships, in shipyards, taverns and other haunts of sailors, it was called spinning yarns: a passing on of history, transmission of culture, and, not incidentally, the basis of our great maritime literature. Atlantis Stories is a compendium of yarns garnered by Mr. Cooper in his years as ordinary seaman in the Atlantis, the 142-foot ketch-rigged sailing research vessel operated by the Woods Hole Oceanographic Institution, of Woods Hole, Massachusetts. After the yacht he was crewing on was sold, Bill applied for a job as crew aboard Atlantis. This was 1944, World War II was still raging and German U-boats were taking an enormous toll on East Coast shipping. Operating under Navy orders, much of the research aboard Atlantis was geared to the detection of submarines. To the seventeen-year-old Cooper, &quot;I was never sure of the exact nature of the work done by the Oceanographic, but it seemed to h ave a lot to do with explosives and underwater sound.&quot; Science was not the purview of the Atlantis&#39;s crew-they went about their business of sailing, keeping the boat ship-shape. Bill&#39;s m emories bring them to life: the bucko mate; the Norwegian shellbacks with heavy accents; shore leaves; the ship&#39;s cat, Felix; and a na&quot;ive teenager absorbing it all. Interestingly, we hear little of the research. The sailing of Atlantis was traditional, the science was cutting edge, and apparently the crew and the researchers had very little interaction. There are revealing portraits of ports of call: Electric Boat in Groton for repairs after the hurricane of&#39;44, New York, Miami, the Bahamas, and Cuba. A window into a past that seems more remote than it actually was, likely because technology sped SEAHISTORY 151 , SUMMER2015

us into the twenty-first century so quickly. Navigation in 1945 was simply compass, log, and look-out. Photography was in black-and-white film . Atlantis Stories h as been edited with great care and skill by Arthur G. Gaines Jr. and Jay Burnett. Sidebars elucidate the memoirs with historical and biographical details, and the phorographs are, as the adage goes, &quot;worth a thousand words.&quot; Books like as this are why we should support our local historical societies. Their publications are of value as local histories, and it is from the local-the particular-that we perceive the universal. Good sea stories do that too. ARDEN SCOTT

Braving the Wartime Seas: A Tribute to the Cadets and Graduates of the US Merchant Marine Academy and Cadet Corps Who Died During WWIL edited by George J. Ryan; primary researcher, Thomas McCaffery (The American Maritime History Project, Xlibris, 2014, 662pp, illus, index, appen, ISB N 978-1-4931-86143; $34.99hc) The US M erchant Marine during World War II served as an arm of national defense, and the stories of those who served and risked or gave their lives deserve public recognition. This final volume in the American Maritime History Project, a private non-profit foundation, provides a wealth of information to advance that recognition, and editor George Ryan is to be congratulated for his perseverance in completing this important project. Braving the Wartime Seas completes the publication initiative begun by Eliot Lumbard, a graduate of the US Merchant Marine Academy at King&#39;s Point, NY. Earlier volumes include lhe Way of the Ship: America&#39;s M aritime H istory Reenvisioned, 1600-2000 (2007) by Alex Roland, W . Jeffrey Bolster, and Alexander Keyssar; and In Peace and War: A H istory ofthe US Merchant Marine Academy at King&#39;s Point (2007) by Jeffrey L. Cruikshank and Chloe G. Kline.

Ryan&#39;s book is a personalized window, albeit a large window, into the lives and stories of merchant mariners in WWII, specifically, the 142 cadet-midshipmen who died in World War II. The book is divided into two parts. The first looks at the US Merchant Marine Cadet Corps during WWII: its purpose, training regimen, and details of 1ife at sea. The biographies of the 142 men follow. Although they were known as &quot;King&#39;s Pointers,&quot; some of these men never stepped foot on campus, having received their training at state maritime academies, or through the Maritime Commission elsewhere. We are reminded that 243,000 merchant mariners served in WWII, with an estimated 8,421 killed at sea or who died as prisoners of war or from their wounds. This sacrifice is acknowledged by the Battle Standard that is held alone among the five federal academies by the US Merchant Marine Academy.