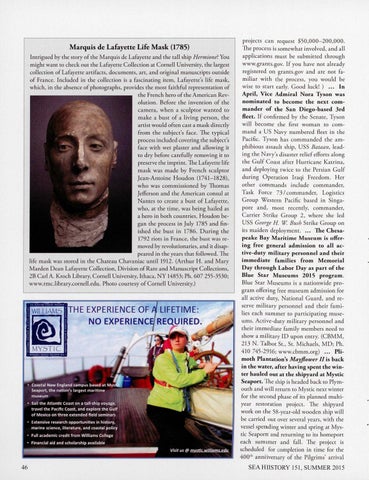 Marquis de Lafayette Life Mask (1785) Intrigued by the story of the Marquis de Lafayette and the tall ship Hermione? You might want to check out the Lafayette Collection at Cornell University, the largest collection of Lafayette artifacts, documents, art, and original manuscripts outside of France. Included in the collection is a fascinating item, Lafayette's life mask, which, in the absence of photographs, provides the most faithful representation of the French hero of the American Revolution. Before the invention of the camera, when a sculptor wanted to make a bust of a living person, the artist would often cast a mask directly from the subject's face. The typical process included covering the subject's face with wet plaster and allowing it to dry before carefully removing it to preserve the imprint. The Lafayette life mask was made by French sculptor Jean-Antoine Houdon (1741-1828), who was commissioned by Thomas Jefferson and the American consul at Nantes to create a bust of Lafayette, who, at the time, was being hailed as a hero in both coumries. Houdon began the process in July 1785 and finished the bust in 1786. During the 1792 riors in France, rhe bust was removed by revolutionaries, and it disappeared in rhe years that followed. The life mask was stored in the Chateau Chavaniac until 1912. (Arthur H. and Mary Marden Dean Lafayette Collection, Division of Rare and Manuscript Collections, 2B Carl A. Kroch Library, Cornell University, Ithaca, NY 14853; Ph. 607 255-3530; www.rmc.library.cornell.edu. Photo courtesy of Cornell University.)

THE EXPERIENCE OF LI FETIME: NO EXPERIENC ~ REQUIRED.

projects can request $50 ,000-200,000. The process is somewhat involved, and all applications must be submitted through www.grants.gov. If you have not already registered on grants.gov and are not familiar with the process, you would be wise to start early. Good luck! ) . . . In April, Vice Admiral Nora Tyson was nominated to become the next commander of the San Diego-based 3rd fleet. If confirmed by the Senate, Tyson will become the first woman to command a US Navy numbered Beet in the Pacific. Tyson has commanded the amphibious assault ship, USS Bataan, leading the Navy's disaster relief efforts along the Gulf Coast after Hurricane Katrina, and deploying twice to the Persian Gulf during Operation Iraqi Freedom. Her other commands include commander, Task Force 73 I commander, Logistics Group Western Pacific based in Singapore and, most recently, commander, Carrier Strike Group 2, where she led USS George H. W Bush Strike Group on its maiden deployment. .. . The Chesapeake Bay Maritime Museum is offering free general admission to all active-duty military personnel and their immediate families from Memorial Day through Labor Day as part of the Blue Star Museums 2015 program. Blue Star Museums is a nationwide program offering free museum admission for all active duty, National Guard, and reserve military personnel and their families each summer to participating museums . Active-duty military personnel and their immediate family members need to show a m ilitary ID upon entry. (CBMM, 213 N. Talbot St., St. Michaels, MD; Ph. 4 10 745-2916; www.cbmm.org) ... Plimoth Plantation's Mayflower II is back in the water, after having spent the winter hauled out at the shipyard at Mystic Seaport. The ship is headed back to Plymouth and will return to Mystic next winter for the second phase of its planned multiyear restoration project. The shipyard work on the 58-year-old wooden ship will be carried out over several years, with the vessel speruding winter and spring at Mystic Seaporn and returning to its homeport each sum1mer and fall. The project is scheduled for completion in time for the 400'h anniiversary of the Pilgrims' arrival