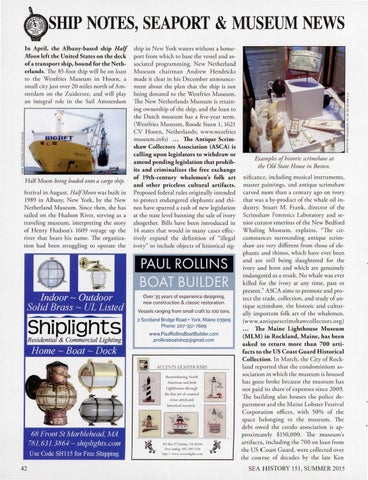 .SHIP NOTES, SEAPORT &amp; MUSEUM NEWS In April, the Albany-based ship Half Moon left the United States on the deck of a transport ship, bound for the Netherlands. The 85-foot ship will be on loan to the Westfries Museum in Hoorn, a small city just over 20 miles north of Amsterdam on the Zuiderzee, and will play an integral role in the Sail Amsterdam

Half Moon being Loaded onto a cargo ship. festival in August. HalfMoon was built in 1989 in Albany, New York, by the New Netherland Museum. Since then, she has sa iled on the Hudson River, serving as a traveling museum, interpreting the story of Henry Hudson&#39;s 1609 voyage up the river that bears his name. The organization had been struggling to operate the

ship in New York waters without a homeport from which to base the vessel and associated programming. New Netherland Museum chairman Andrew Hendricks made it clea r in his December announcement about the plan that the ship is not being donated to the Wesrfries Museum . The New Netherlands Museum is retaining ownership of the ship, and the loan to the Durch museum has a fi ve-year term. (Westfries Museum, Roode Steen 1, 1621 CV Hoorn, Netherlands; www.westfries museum.info) . . . The Antique Scrimshaw Collectors Association (ASCA) is calling upon legislators to withdraw or amend pending legislation that prohibits and criminalizes the free exchange of 19th-century whalemen&#39;s folk art and other priceless cultural artifacts. Proposed federal rules originally intended to protect endangered elephants and rhinos have spurred a rash of new legislation at the state level banning the sale of ivory altogether. Bills have been introduced in 14 states that wo uld in many cases effectively expand the definition of &quot;illegal ivory&quot; to include objects of historical sig-

Examples ofhistoric scrimshaw at the Old State House in Boston. nificance, including musical instruments, master paintings, and antique scrimshaw carved more than a century ago on ivory that was a by-product of the whale oil industry. Stuart M. Frank, director of the Scrimshaw Forensics Laboratory and senior curator emeritus of the New Bedford Whaling Museum, explains, &quot;The circumstances surrounding antique scrimshaw are very different from those of elephants and rhinos, which have ever been and are still being slaughtered for the ivory and horn and which are genuinely endangered as a result. No whale was ever killed for the ivory at any time, past or present.&quot; ASCA aims to promote and protect the trade, collection, and study of antique scrimshaw, the historic and cultural ly important folk art of the whalemen. (www.a ntiquescrimshawcollecrors.org) The Maine Lighthouse Museum (MLM) in Rockland, Maine, has been asked to return more than 700 artifacts to the US Coast Guard Historical Collection. In March, the C ity of Rockland reported that the condominium association in which the museum is housed has gone broke because the museum has not paid its share of expenses since 2009. The building also houses the police department and the Maine Lobster Festival Corporation offices, with 50% of the space belonging to the museum. The debt owed the condo association is approximately $150,000. The museum&#39;s artifacts, including the 700 on loan from the US Coast Guard, were collected over the coLLrse of decades by the late Ken