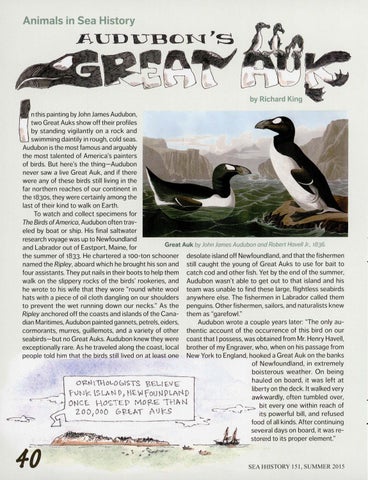 n this painting by John James Audubon, two Great Auks show off their profiles by standing vigilantly on a rock and swimming daintily in rough , cold seas. Audubon is the most famous and arguably the most talented of America &#39;s painters of birds. But here&#39;s the thing-Audubon never saw a live Great Auk, and if there were any of these birds still living in the far northern reaches of our continent in the 1830s, they were certainly among the last of their kind to walk on Earth. To watch and collect specimens for The Birds of America, Audubon often traveled by boat or ship. His final saltwater research voyage was up to Newfoundland and Labrador out of Eastport, Maine, for

the summer of 1833. He chartered a 100-ton schooner named the Ripley, aboard which he brought his son and four assistants. They put nails in their boots to help them walk on the slippery rocks of the birds&#39; rookeries, and he wrote to his wife that they wore &quot;round white wool hats with a piece of oil cloth dangling on our shoulders to prevent the wet running down our necks.&quot; As the Ripley anchored off the coasts and islands of the Canadian Maritimes, Audubon painted gannets, petrels, eiders, cormorants, murres, guillemots, and a variety of other seabirds-but no Great Auks. Audubon knew they were exceptionally rare. As he traveled along the coast, local people told him that the birds still lived on at least one

desolate island off Newfoundland, and that the fishermen still caught the young of Great Auks to use for bait to catch cod and other fish. Yet by the end of the summer, Audubon wasn &#39;t able to get out to that island and his team was unable to find these large, flightless seabirds anywhere else. The fishermen in Labrador called them penguins. Other fishermen , sailors, and naturalists knew them as &quot;garefowl.&quot; Audubon wrote a couple years later: &#39;The only authentic account of the occurrence of this bird on our coast that I possess, was obtained from Mr. Henry Havel!, brother of my Engraver, who, when on his passage from New York to England, hooked a Great Auk on the banks of Newfoundland, in extremely boisterous weather. On being