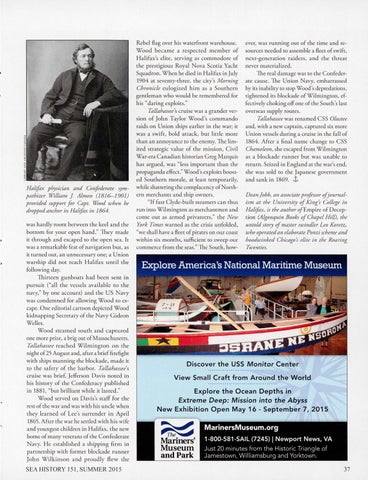 Halifax physician and Confede rate sympathizer William J Almon (1 81 6-1901) provided support fo r Capt. Wood when he dropped anchor in Halifax in 1864. was hardly room between the keel and the bottom for your open hand.&quot; They m ade it through and escaped to the open sea. It was a remarkable feat of navigation but, as it turned out, an unnecessary one; a Union warship did not reach H alifax until the following day. Thirteen gunboats h ad been sent in pursuit (&quot;all the vessels available to the navy,&quot; by one account) and the U S N avy was condemned for allowing Wood to escape. One editorial cartoon depicted W ood kidnapping Secretary of the Navy G ideon W elles. W ood steamed south a nd captured one more pri ze, a brig out of M assachu setts. Tallahassee reached Wilming ron on the night of25 August and, after a brief firefight w ith ships m anning the blockade, m ade it to the safety of the harbor. Tallahassee&#39;s cruise was brief, Jefferson D avis n o ted in his history of the Confederacy published in 1881, &quot;but brilliant while it las ted .&quot; Wood served on D avis&#39;s staff for the rest of the wa r and was with his uncle when t hey learned of Lee&#39;s surrender in April 1865. After the war he settled with his wife and youngest children in H alifax, the new home of m any ve terans of the Confederate Navy. H e established a sh ipping firm in partnership with fo rmer blockade runner Joh n W ilkinson a nd proudly fl ew the

Rebel flag over his waterfront warehouse. Wood becam e a resp ected m ember of Halifax&#39;s elite, serving as commodore of the prestigio us Royal Nova Scotia Yacht Squadron. When he died in H alifax in July 1904 at seventy-three, the city&#39;s M orning Ch ronicle eulogized him as a Southern gentleman who would be rem embered for his &quot;daring exploits.&quot; Tallahassee&#39;s cruise was a grander version of John Taylor Wood &#39;s commando raids on Union ships earlier in the war; it was a swift, bold attack, but little more than an annoyance to the enemy. The limited strategic value of the mission, C ivil War-era C anadian hisrorian G reg M arquis has argued, was &quot;less important than the propaganda effect.&quot; Wood &#39;s exploits boosted Southern morale, at least temporarily, whi le shattering the complacency ofNorthern merchants and ship ow ners. &quot;If fas t C lyde-built steamers can thus run into Wilmington as merchantmen and com e out as armed privateers,&quot; the New York Times wa rned as the crisis unfolded, &quot;we shall have a fleet of pirates on our coast within six months, sufficient to sweep our commerce from the seas.&quot; The South, how-

ever, was running out of the time and resources needed to assemble a fleet of swift, n ext-generation raiders, and th e threat never m aterialized. The real dam age was to the Confederate cause. The Union N avy, embarrassed by its inability to stop Wood &#39;s depredations, tightened its blockade of Wi lmington, effectively choking off one of the South &#39;s las t overseas supply routes. Tallahassee was renam ed CSS Olustee and, with a new captain, captured six more U nion vessels during a cruise in the fa ll of 1864. A fter a fin al nam e change to CSS Chameleon, she escaped from Wilmington as a blockade runner but was unable to return . Seized in England at the war&#39;s end, she was sold to the Japanese government and sank in 1869. J,

D ean ]obb, an associate professor ofjournalism at the University of King&#39;s College in Halifax, is the author ofEmpire of D eceptio n (Algonquin Books of Chapel H ill), the untold story of master swindler Leo Koretz, who operated an elaborate Ponzi scheme and hoodwinked Chicago&#39;s elite in the Roaring Twenties.