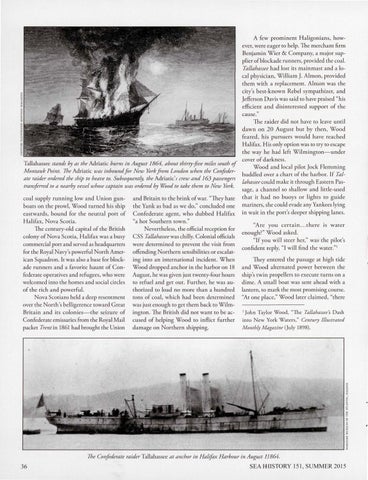 A few prominent Haligonians, however, were eager to help. The merchant firm Benjamin Wier &amp; Company, a major supplier of blockade runners, provided the coal. Tallahassee h ad lost its mainmast and a local physician, Willi am]. Almon, provided them with a replacement. Almon was the city&#39;s best-known Rebel sympathizer, and Jefferson D avis was said to have praised &quot;his efficient and disinterested support of the cause.&quot; The raider did not have to leave umil dawn on 20 August bur by rhen, Wood feared, his pursuers would h ave reached H alifax. His only option was to try to escape the way he had lefr Wilmington-under cover of darkness. Tallahassee stands by as the Adriatic burns in August 1864, about thirty-five miles south of Wood and local pilot Jock Flemming Montauk Point. The Adriaric was inbound for New York from London when the Confederhuddled over a chart of rhe harbor. If Talate raider ordered the ship to heave to. Subsequently, the Adriaric&#39; s crew and 163 passengers lahassee could make ir through Eastern Pastransferred to a nearby vessel whose captain was ordered by Wood to take them to New York. sage, a channel so shallow and litde-used coal supply running low and Union gun- and Britain to the brink of wa r. &quot;They hate rhar ir h ad no buoys or lighrs ro guide boars on rhe prowl, Wood turned his ship the Yank as bad as we do,&quot; concluded one mari ners, she could evade any Yankees lying eastwards, bound for the neutral port of Confederate agent, who dubbed Halifax in wair in the port&#39;s deeper shipping lanes. Halifax, Nova Scotia. &quot;a hot Sourhern town.&quot; &quot;Are you certai n ... rhere is water The century-old capital of the British Nevertheless, the official reception for enough ?&quot; Wood asked. colony of Nova Scotia, Halifax was a busy CSS Tallahassee was chilly. Colonial officials &quot;If yo u will sreer her,&quot; was rhe pilot&#39;s commercial port and served as headquarters were determined to prevent rhe visit from confident reply, &quot;I will find the water.&quot; 1 for the Royal Navy&#39;s powerful North Amer- offending Northern sensibilities or escalatican Squadron. It was also a base for block- ing into an international incident. When They entered the passage at high tide ade runners and a favorite haunt of Con- Wood dropped anchor in the harbor on 18 and Wood alternated power between the federare operatives and refugees, who were August, he was given just rwenty-four hours ship&#39;s twin propellers ro execute turns on a welcomed into the homes and social circles to refuel and get out. Further, he was au- dime. A small boat was sent ahead with a of the rich and powerful. thorized to load no more than a hundred lantern, ro mark the most promising course. Nova Scoria ns held a deep resentment tons of coal, which had been determined &quot;At one place,&quot; Wood larer claimed, &quot;there over the North &#39;s belligerence toward Great was just enough to get them back to WilmBritain and its colonies-the seizure of ington. The British did not want to be ac- 1 John Taylor Wood, &quot;The Tallahassee&#39;s Dash Confederate emissaries from rhe Royal Mail cused of helping Wood to inflict further into New York Waters,&quot; Century Illustrated Monthly Magazine (July 1898). packer Trent in 1861 had brought the Union damage on Northern shipping.

The Confederate raider Tallahassee at anchor in Halifax H arbour in August 11 864.