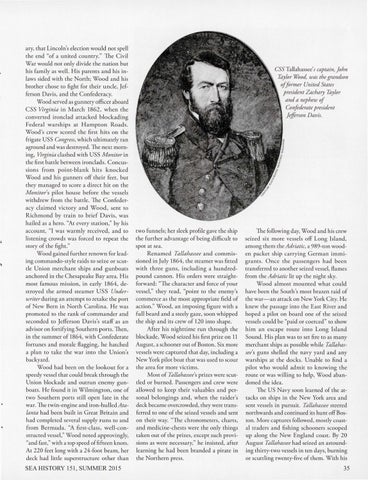 ary, that Lincoln's election would not spel l the end "of a united country." The C ivil War wo uld not only divide the n ation but his family as well. His parents and his inlaws sided with the North; Wood and h is brother chose to fight for their uncle, Jefferson D avis, and the C onfederacy. Wood served as gunnery officer aboard CSS Virginia in M arch 1862, w hen the converted ironclad attacked blockading Federal wars hips at H a mp to n Road s. Wood 's crew scored the fi rst h its on the fri gate USS Congress, which ultimately ran aground and was destroyed. The next morning, Virginia clashed with USS Monitor in the first battle between ironclad s. Concussions fro m point-bl a n k h its knocked Wood and his gunners off their fee t, but they managed to score a di rec t hit on the M onitor's pilot house befo re the vessels withdrew fro m the battle. The Confederacy claimed victory and Wood , sent to Richmond by train to brief Davis, was hailed as a hero. "At every station ," by his account, "I was warmly received , and to listening crowds was fo rced to rep eat the story of the fi ght." Wood gained further renown for leading commando-style raids to seize or scuttle Union merch ant ships and g unboats anchored in the C hesapeake Bay area. His most fa mous mission, in early 1864, destroyed the armed steam er USS Underwriter du ring an attempt to re take the port of New Bern in No rth Carolina. H e was promoted to the rank of com ma nder and seconded to Jefferson D avis's staff as an advisor on fo rtify ing Southern ports. Then, in the summer of 1864, with Con federate fo rtunes and morale flagging, he h atched a plan to take the war into th e U nion's backyard . Wood had been on the lookout for a speedy vessel that could break th ro ugh the U nion blockade and outrun en em y gunboats. H e found it in W ilmington, one of two Southern ports still open late in the war. The twin-engine and iron-hulled Atalanta had been built in Great Britain and had completed several supply runs to and fro m Berm uda . "A first-class, well-co nstructed vessel," Wood noted approvingly, "and fas t," with a top speed of fi ftee n knots. At 220 feet long with a 24-foo t beam , her deck had little superstructure other than SEAHISTORY 151 , SU MME R2015

two funnels; her sleek profile gave the ship the further adva ntage of being difficult to spot at sea. Ren am ed Tallahassee and commissioned in July 1864, the steamer was fitted w ith three guns, including a hundredpound cannon. His orders were straightforwa rd: "The character and force of your vessel," they read, "point to the enemy's commerce as the most appropriate field of action ." Wood, an imposing figure with a full beard and a steely gaze, soon whipped the ship and its crew of 120 into shape. After his nighttime run through the blockade, Wood seized his first prize on 11 August, a schooner out of Boston. Six more vessels were captured that day, including a New York pilot boat that was used to scour the area fo r more victims. Most of Tallahassee's prizes were scuttled or burned . Passengers and crew were allowed to keep their valuables and person al belongings and, when the raider's deck became overcrowded, they were transfe rred to one of the seized vessels and sent on their way. "The chronometers, charts, and medicine-chests we re the only things taken our of the prizes, except such provisions as were necessary," he insisted, after learning he had been branded a pi rate in the Northern press.

The following day, Wood and his crew seized six mo re vessels off Long Island , among them the Adriatic, a 989-ton wooden packet ship carry ing German imm igrants. O nce the passe ngers h ad been transferred to another seized vessel, flames from the Adriatic lit up the night sky. W ood almos t mounted wh at could have been the South 's most brazen raid of the war-an attack on New York C ity. H e knew the passage into the East River and hoped a pilot on board one of the seized vessels could be "paid or coerced " to show him an escape ro ute into Lo ng Island Sound. His plan was to set fi re to as many merchant ships as possible while Tallahassee's guns shelled the navy yard and any wa rships at the docks. Unable to find a pilot who wo uld admit to k nowin g the ro ute or was willing to help, Wood abandoned the idea. The US Navy soon learned of the attacks on ships in the New York area and sent vessels in pursuit. Tallahassee steered northwa rds and continued its hunt off Boston . M ore captures followed, mostly coastal traders and fi shing schooners scooped up along the New England coast. By 20 August Tallahassee had seized an asto unding thirty-two vessels in ten days, burning or scuttling twenty-five of them . W ith his