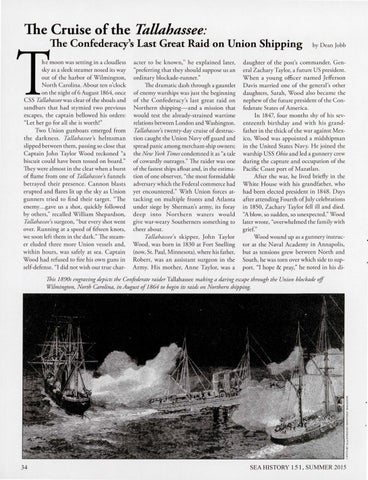 The Cruise of the Tallahassee:

___.......The Confederacy&#39;s Last Great Raid on Union Shipping he moon was setting in a cloudless sky as a sleek steamer nosed its way out of the harbor of Wilmington, North Carolina. About ten o&#39;clock on the n ight of 6 August 1864, once CSS Tallahassee was clear of the shoals and sandbars that had stymied two previous escapes, the captain bellowed his orders: &quot;Let her go for all she is worth!&quot; Two Union gunboats emerged from the d arkness. Tallahassee &#39;s helmsma n slipped between them, passing so close that Captain John Taylor Wood reckoned &quot;a biscuit could have been tossed on board .&quot; They were almost in the clear when a burst of flame from one of Tallahassee&#39;s funnels betrayed their presence. Cannon bl as ts erupted and flares lit up the sky as Union gunners tried to find their target. &quot;The enemy... gave us a shot, quickly followed by others,&quot; recalled Wi lli am Shepardson, Tallahassee&#39;s surgeon, &quot;but every shot went ove r. Running at a speed of fifteen knots, we soon left them in the dark.&quot; The steamer eluded three more Union vessels and, within hours, was safely at sea. Captain Wood had refused to fire his own guns in self-defense. &quot;I did not wish our true char-

acter to be known,&quot; he explained later, &quot;preferring that they should suppose us an ordinary blockade-runner.&quot; The dramatic das h through a gauntlet of enemy wa rships was just the beginning of the Confederacy&#39;s last great raid on Northern shipping-and a mission that wo uld test the already-strained wa rtime relations between London and Washington. Tallahassee&#39;s twenty-day cruise of destruction caught the Union Navy off guard and spread panic among merchant-ship owners; the New Yo rk Times condemned it as &quot;a tale of cowardly outrages.&quot; The raider was one of the fastes t ships afloat and, in the estimation of one observer, &quot;the most formidable adversary which the Federal commerce had ye t encountered.&quot; With Union forces attacking on multiple fronts and Atlanta under siege by Sherm an&#39;s army, its foray deep into Northern wa ters would give war-weary Southerners something to cheer about. Tallahassee&#39;s ski pper, John Taylor Wood, was born in 183 0 at Fort Snelling {now, Sr. Paul, Minnesota), where his father, Robert, was an assistant surgeon in the Army. His mother, Anne Taylor, was a

daughter of the post&#39;s commander, General Zachary Taylor, a future US president. When a young officer named Jefferson D avis married one of the general &#39;s other daughters, Sarah, Wood also became the nephew of the future president of the Confederate States of America. In 1847, four months shy of his seventeenth birthday and with his grandfather in the thick of the war against Mexico, Wood was appointed a midshipman in the United States Navy. H e joined the warship USS Ohio and led a gunnery crew during the capture and occupation of the Pacific Coast port of Mazatlan. After the war, he lived briefly in the White House with his grandfather, who had been elected president in 1848. Days after attending Fourth of July celebrations in 1850, Zachary Taylor fell ill and died. &#39;&#39;A blow, so sudden, so unexpected,&quot; Wood later wrote, &quot;overwhelmed the fa mily with grief.&quot; Wood wound up as a gunnery instructor at the Naval Academy in Annapolis, but as tensions grew between North and South, he was torn over which side to support. &quot;I hope &amp; pray,&quot; he noted in his di-

This 1890s engraving depicts the Confederate raider Tallahassee making a daring escape through the Union blockade off Wilmington, North Carolina, in August of 1864 to begin its raids on Northern shipping.