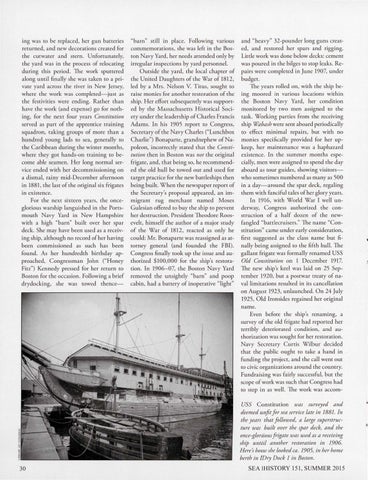 ing was to be replaced, her gun batteries remrned, and new decorations created for the cutwa ter and stern. Unfo rtunately, the yard was in the process of relocat ing during this period. The work sputtered along unti l finally she was taken to a private ya rd across the river in N ew Jersey, where the wo rk was completed- just as the fes tivities were ending. Rather than have the work (and expense) go for nothing, fo r the next four yea rs Constitution served as part of the apprenti ce training squad ro n, taking groups of more than a hundred yo ung lads ro sea, generally to the Caribbean during the winter months, where they got hands-on training to become able seamen. Her long normal service ended with her decommissioning on a dism al, rainy mid-December afternoon in 1881 , the las t of the original six fri gates in existence. For the next sixteen yea rs, the onceglorious wa rship languished in the Portsmouth Navy Yard in N ew H ampshire with a high "barn" built over her spar deck. She may have been used as a receiving ship, although no record of her having been commissioned as such has been fo und. As her hundredth birthday approached, Congressman John ("H oney Fitz") Kennedy pressed fo r her return to Boston for the occasion. Following a brief drydocking, she was rowed thence-

"barn" still in place. Following va rious commemorations, she was left in the Boston Navy Yard, her needs attended only by irregular inspections by yard personnel. Outside the yard, the local chapter of rhe United D aughters of rhe War of 181 2, led by a Mrs. Nelson V. T ims, sought to raise monies for another restoration of the ship. H er effort subsequently was supported by the Massachusetts Historical Society under the leadership of C harles Francis Adams. In his 1905 report to Congress, Secretary of rhe Navy C harles ("Lunchbox C harlie") Bonaparte, grandnephew of Napoleon, incorrectly stated that the Constitution then in Bosron was not the original fri gate, and, that being so, he recommended the old hull be rowed our and used fo r rarger practice for rhe new battleships rhen being built. W hen rhe newspaper report of rhe Secretary's proposal appea red, an immigrant rug merchant named M oses G ulesian offered to buy rhe ship to prevent her destruction. President Theodore Roosevelt, himself the author of a major study of the War of 1812, reacted as only he could: Mr. Bonaparte was reassigned as attorney general (and fo unded the FBI) . Congress finally rook up rhe issue and authorized $100,000 fo r rhe ship's resrorarion. In 1906- 07, rhe Boston Navy Yard removed rhe unsightly " barn" and poop cabin, had a battery of inoperative "light"

and "heavy" 32-pounder long guns created, and res tored her spars and riggin g. Little wo rk was done below decks: cement was poured in rhe bilges to stop leaks. Repairs were completed in June 1907, under budget. The yea rs rolled on, with rhe ship being moored in various locarions within the Boston Navy Yard, her condition moni tored by two men assigned to the rask. Working parries from the receiving ship Wa bash were sent aboard periodically to effect minimal repairs, but with no monies specifically provided for her upkeep, her m aintenance was a haphazard existence. In the summer months especially, men were assigned to spend the day aboard as tour guides, showing visirorswho sometimes numbered as many as 500 in a day- around rhe spar deck, regaling them with fanciful tales of her glory yea rs. In 191 6, with Wo rld Wa r I well underway, Congress authorized the construction of a half dozen of the newfangled " battlecruisers." The name "Constimtion" came under early consideration, first suggested as the class name but finally being assigned to the fifth hull. The gallant fri gate was fo rmally renamed USS Old Constitution on 1 D ecember 1917. The new ship's keel was laid on 25 September 1920, bur a postwa r treaty of naval limitations resulted in its cancellation on August 1923, unlaunched. On 24 July 1925, Old Ironsides regained her original name. Even before the ship's renaming, a survey of the old fri gate had reported her terribly deteriorated condition, and authorizatio n was sought fo r her res toration. Navy Secretary C urtis Wilbur decided that the public ought to take a h and in fundin g the project, and the call went out ro civic organizations aro und the country. Fundraising was fai rly successful, bur the scope of wo rk was such that C ongress had to step in as well. The work was accomUSS Constimtion was surveyed and deemed unfit for sea service late in 1881. In the years that fo llowed, a large superstructure was built over the spar deck, and the once-gloriious frigate was used as a receiving ship untiil another restoration in 1906. Here's hozw she looked ca. 19 05, in her home berth in lDry D ock 1 in Boston.