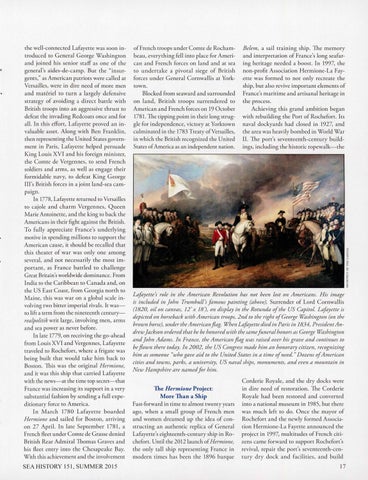 rhe well-con necred Lafayette was soon inrroduced w General George Washingron and joined his senior sraff as one of rhe general&#39;s aides-de-camp. Bur rhe &quot;insurgenrs,&quot; as American parriors were called ar Versailles, were in dire need of more men and materiel to turn a largely defensive strategy of avoiding a direcr battle with British troops inro an aggressive thrust w defeat the invading Redcoats once and for all. In this effort, Lafaye tte proved an invaluable asset. Along with Ben Franklin, rhen representing the United States government in Paris, Lafaye ue helped persuade King Louis XVI and his forei gn minister, the Comte de Vergennes, to send French soldiers and arms, as well as engage rheir form idable navy, to defeat King George Ill&#39;s British forces in a joint land-sea campaign. In 1778, Lafayette returned w Versailles to cajole and ch arm Vergennes, Queen Marie Antoinette, and the king to back the Americans in their fight against the British. To full y appreciate France&#39;s underlying motive in spending millions to support rhe American cause, it should be recalled that this cheater of war was only one among several, and not necessarily the most important, as France battled to challenge Great Britain&#39;s worldwide dominance. From India w the Caribbean ro Canada and, on the US East Coasr, from Georgia north w Maine, this was war on a global scale involving rwo bitter imperial rivals. It wasro lift a term from the nineteenth centuryrealpolitik writ large, involving men, arms and sea power as never before. In late 1779, on receiving the go-ahead from Louis XVI and Vergennes, Lafayette traveled w Rochefort, where a fri gate was being built that would rake him back w Bosron. This was the original H ermione, and it was this ship that carried Lafayette with the news-at the rime rop secret-that France was increasing its support in a very substantial fashion by sending a full expeditionary fo rce to America. In March 1780 Lafayette boarded H ermione and sailed for Bosron, arriving on 27 April. In late September 178 1, a French fleet under Comte de Grasse denied British Rear Admiral Thomas Graves and his fleet entry into the C hesapeake Bay. W irh this achievement and the involvement

of French troops under Comte de Rochambeau, everyth ing fell into place for American and French forces on land and ar sea to undertake a pivoral siege of British forces under General Cornwallis at Yorkrown. Blocked from seaward and surrounded on land, British troops surrendered to American and French forces on 19 Ocrober 1781. The tipping point in their long struggle for independence, vicrory at Yorkrown culminated in the 1783 Treaty ofVersailles, in which the British recognized the Unired States of America as an independent nation.

Belem, a sail rraining ship. The memory and interpretation of France&#39;s long seafaring heritage needed a boost. In 1997, the non-profir Associarion Hermione-La Fayette was formed w not only recreate rhe ship, but also revive important elements of France&#39;s maritime a nd artisa nal heritage in the process. Achieving this grand ambition began with rebuilding the Port of Rochefort. Its naval dockya rds had closed in 1927, and the area was heavily bombed in World War II. The porr&#39;s seventeenth-century buildings, including the hisroric ropewalk-the

Lafayette&#39;s role in the American Revolution has not been lost on Americans. H is image is included in john Trumbull&#39;s famous painting (a bove), Surrender of Lord Cornwallis (182 0, oil on canvas, 12 &#39;x 18 &#39;), on display in the Rotunda of the US Capitol. Lafayette is depicted on horseback with American troops, 2nd to the right of George Washington (on the brown horse), under the American flag. When Lafayette died in Paris in 1834, President Andrew Jackson ordered that he be honored with the same funeral honors as George Washington and john Adams. I n France, the American flag was raised over his grave and continues to be flown there today. In 2002, the US Congress made him an honorary citizen, recognizing him as someone &quot;who gave aid to the United States in a time of need.&quot; Dozens ofAmerican cities and towns, parks, a university, US naval ships, monuments, and even a mountain in New Hampshire are named for him.

The Hermione Project: More Than a Ship Fast-forward in rime ro almost twenty yea rs ago, when a small group of French m en and women dreamed up rhe idea of constructing an authentic replica of General Lafaye tte&#39;s eighteenth-century ship in Rochefort. Until the 2012 launch of Hermione, rhe only rall ship representing France in modern times has been the 1896 barque

Corderie Royale, and the dry docks were in dire need of restoration. The Corderie Royale had been restored and converted into a national museum in 1985, bur there was much lefr ro do. Once rhe m ayor of Rochefort and the newly formed Association H ermione-La Faye tte announced the project in 1997, mulrirudes of French citizens came forwa rd ro support Rochefort&#39;s revival, repair the port&#39;s seventeenth-centu ry dry dock and faciliries, a nd build 17