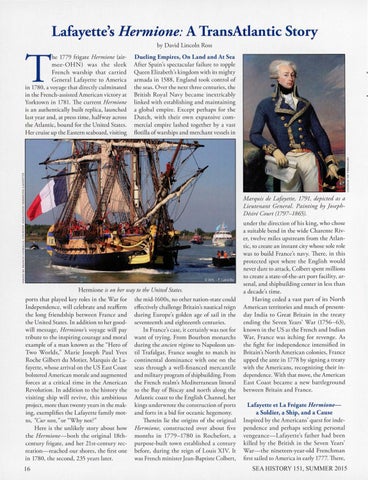 H ermione is on her way to the United States. pons that played key roles in the War for Independence, will celebrate and reaffirm the long friendship between Fra nce a nd the Unired States. In addition to her goodwill message, H ermione's voyage w ill pay tribute ro the inspiring courage and moral example of a m an known as the "H ero of Two Worlds," M a rie Joseph Paul Yves Roche G ilbert du Motier, Ma rquis de Lafaye tte, whose arrival on the US East Coast bolstered American morale and augmented forces at a critical time in the Am erican Revolution . In addition ro the history the visiting ship will revive, this a mbitious project, more than twenty years in rhe making, exemplifies the Lafaye tte fa mily mo tto, "Cur non," or "Why nor?" H ere is the unli kely story about how the H ermione-both the o riginal 18thcentury fri gate, and her 2l sr-century recreation- reached our shores, the first one in 178 0, the second, 235 yea rs later. 16

the mid-1600s, no other nation-state could effectively challenge Britain's nautical reign during Europe's golden age of sail in the seventeenth and eighteenth centuries. In France's case, it certainly was not for want of trying. From Bourbon monarchs during the ancien regime ro Na poleon until T rafa lgar, France soughr ro m atch its continental dominance with o ne on the seas through a well-fin anced m ercantile and military program of shipbuilding. From the French realm's M editerranean littoral ro the Bay of Biscay and nonh along the Atla ntic coas t ro the English C hannel, her kings underwrore rhe consrrucrion of pon s and fo res in a bid for ocea nic hegemony. Therein lie the o rigins of the original H ermione, construc ted over abo ut five months in 1779-178 0 in Rochefort, a purpose-built town es tablished a century before, during the reign of Lo uis X IV. It was French minister Jean-Baptiste Colbert,

under the direction of his king, who chose a suitable bend in the wide C harenre River, twelve miles upstream from the Atlantic, to create a n instant city whose sole role was to build France's navy. There, in this protected spot where the En glish wo uld never dare ro at tack, Colbert spent millions ro create a state-of-the-an port facility, arsenal, and shipbuilding center in less than a decade's time. H aving ceded a vas t pan of its North American territories and much of presentd ay India ro G reat Britain in the treaty ending the Seven Years' W ar (1756-63), known in the US as the French and Indian Wa r, Fra nce was irching for revenge. As the fi ght fo r independence inten sified in Britain's North Ame rican colonies, France upped the ante in 1778 by signing a treaty with the Am ericans, recognizing their independence. With that move, the American Eas t Coas t became a new battleground between Britain and France.

Lafayette et La Fregate Hermionea Soldier, a Ship, and a Cause Inspired by t he A mericans' quesr for independence a nd perhaps seeking personal vengeance-Lafayeu e's facher had been killed by the British in rhe Seven Years' War- the nineteen-year-old Frenchma n first sailed to A merica in early 1777. There, SEA HISTORY 151 , SUMMER 2015