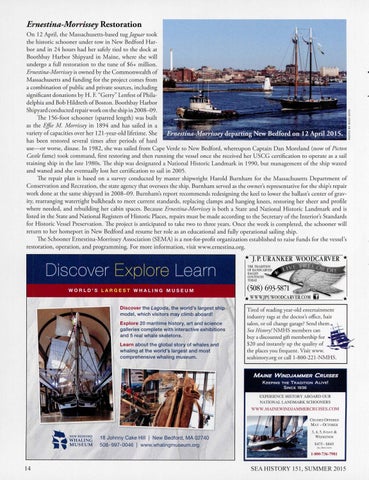 Ernestina-Morrissey Restoration On 12 April, the Massachusetts-based tug jaguar took the historic schooner under tow in New Bedford Harbor and in 24 hours had her safely tied to the dock at Boothbay Harbor Shipyard in Maine, where she will undergo a full restoration to the tune of $6+ million. Ernestina-Morrissey is owned by the Commonwealth of Massachusetts and funding for the project comes from a combination of public and private sources, including significant donations by H.F. "Gerry" Lenfest of Philadelphia and Bob Hildreth of Boston. Boothbay Harbor Shipyard conducted repair work on the ship in 2008-09. ~ z The 156-foot schoo ner (sparred length) was built ~ as the Effie M. Morrissey in 1894 and has sailed in a > = variety of capacities over her 121-year-old lifetime. She has been restored several times after periods of hard use-or worse, disuse. In 1982, she was sailed from Cape Verde to New Bedford, wh ereupon Captain Dan Moreland (now of Picton Castle fame) took command, first restoring and then running the vessel once she received her USCG certification to operate as a sail training ship in the late 1980s. The ship was designated a National Historic Landmark in 1990, but management of the ship waxed and waned and she eventually lost her certification to sail in 2005. The repair plan is based on a survey conducted by master shipwright Harold Burnham for the Massachusetts Department of Conservation and Recreation, the state agency that oversees the ship. Burnham served as the owner's representative for the ship's repair work done at the same shipyard in 2008- 09. Burnham's report recommends redesigning the keel to lower the ballast's center of gravity, rearranging watertight bulkheads to meet current standards, replacing clamps and hanging knees, restoring her sheer and profile where needed, and rebuilding her cabin spaces. Because Ernestina-Morrissey is both a State and National Historic Landmark and is listed in the State and National Registers of Historic Places, repairs must be made according to the Secretary of the Interior's Standards for Historic Vessel Preservation. The project is anticipated to take two to three years. Once the work is completed, the schooner will return to her homeport in New Bedford and resume her role as an educational and fully operational sailing ship. The Schooner Ernestina-Morrissey Association (SEMA) is a not-for-profit organization established to raise funds for the vessel's restoration, operation, and programming. For more information, visit www.ernesti na.org. ~

Discover the Lagoda, the world's largest ship model, which visitors may climb aboard! Explore 20 maritime history, art and science galleries complete with interactive exhibitions and 5 real whale skeletons. Learn about the global story of whales and whaling at the world's largest and most comprehensive whaling museum.