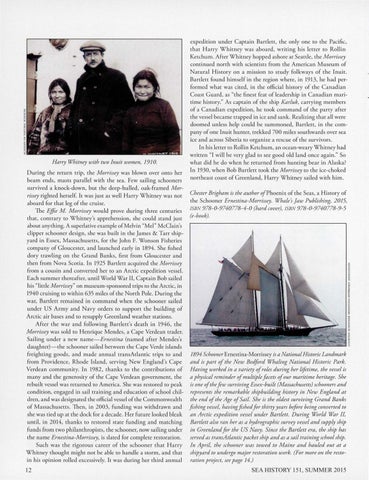 During the return trip, the Morrissey was blown over onto her beam ends, masts parallel with the sea. Few sailing schooners survived a knock-down, bur the deep-hulled, oak-framed Morrissey righted herself. Ir was just as well Harry Whitney was nor aboa rd for rhar leg of the cruise. The Effie M. Morrissey would prove during three centuries rhar, contrary to Whitney's apprehension, she could stand just about anything. A superlative example of Melvin "Mel " McClain's clipper schooner design, she was built in the James & Tarr shipya rd in Essex, Massachusetts, for the John F. Wonson Fisheries co mpany of G loucester, and launched early in 1894. She fi shed dory trawling on rhe Grand Banks, first from Gloucester and then from Nova Scotia. In 1925 Bartlett acquired rhe Morrissey from a cousin and converted her ro an Arctic expedition vessel. Each summer thereafter, until World War II, Captain Bob sailed his "li ttle Morrissey" on museum-sponsored trips ro rhe Arctic, in 1940 cruising to within 635 miles of the North Pole. During the war, Bartlett remained in command when the schooner sai led under US Army and Navy orders to support the building of Arctic air bases and ro resupply Greenland weather stations. After the war and following Bartlett's death in 1946, the Morrissey was sold ro Henrique Mendes, a Cape Verdean trader. Sailing under a new name-Ernestina (named after M endes's daughter) -the schooner sailed between the Cape Verde islands freighting goods, and made annual transAtlantic trips ro and from Providence, Rhode Island, serving New England 's Cape Verdean community. In 1982, thanks ro the contributions of many and the generosity of the Cape Verdean government, the rebuilt vessel was returned ro America. She was restored to peak co ndition, engaged in sail training and education of school children, and was designated the official vessel of the Commonwealth of Massachuserrs. Then, in 2003, funding was withdrawn and she was tied up at the dock for a decade. H er future looked bleak until, in 2014, thanks to restored stare funding and matching funds from two philanthropists, the schooner, now sailing under the name Ernestina-Morrissey, is slated for complete restoration. Such was rhe rigorous career of the schooner that Harry Whitney thought might nor be able ro handle a storm, and rhar in his opinion rolled excessively. Ir was during her third annu al 12

expedition under Captain Bartlett, the only one to the Pacific, that Harry Whitney was aboard, writing his letter to Rollin Ketchum. After Whitney hopped ashore ar Seattle, rhe Morrissey continued north with scientists from rhe American Museum of Natural History on a mission ro study folkways of rhe Inuit. Bartlett found himself in the region where, in 191 3, he had performed what was cited, in rhe official history of the Canadian Coast G uard, as "rhe finest feat of leadership in Canadian m aritime history." As captain of the ship Karluk, carrying members of a Canadian expedition, he rook command of the party after the vessel became trapped in ice and sa nk. Realizing that all were doomed unless help could be summoned, Bartlett, in the company of one Inuit hunter, trekked 700 miles southwards over sea ice and across Siberia ro organize a rescue of the survivors. In his letter to Rollin Ketchum, an ocean-weary Whitney had written "I will be very glad ro see good old land once again." So what did he do when he returned from hunting bear in Alas ka? In 1930, when Bob Bartlett rook the Morrissey ro the ice-choked northeast coast of Greenland, H arry Whitney sailed with him. Chester Brigham is the author of Phoenix of the Seas, a Histo ry of the Schooner Ernestina-Morrissey. Whale's jaw Publishing, 2 015, ISBN 978- 0-9740778-4- 0 (hard cover), ISBN 978-0-9740778-9-5 (e-book).

1894 Schooner Ernestina-Morrissey is a National Historic Landmark and is part of the New Bedford Whaling National H istoric Park. Having worked in a variety of roles during her lifetime, the vessel is a physical reminder of multiple facets ofour maritime heritage. She is one ofthe few surviving Essex-built (Massachusetts) schooners and represents the remarkable shipbuilding history in New England at the end of the Age of Sail. She is the oldest surviving Grand Banks fishing vessel, having fished for thirty years before being converted to an Arctic expedition vessel under Bartlett. During Wo rld War fl Bartlett also ran her as a hydrographic survey vessel and supply ship in Greenland for the US Navy. Since the Bartlett era, the ship has served as transAtlantic packet ship and as a sail training school ship. In April, the schooner was towed to Maine and hauled out at a shipyard to undergo major restoration work. (For more on the restoration project, see page 14.)