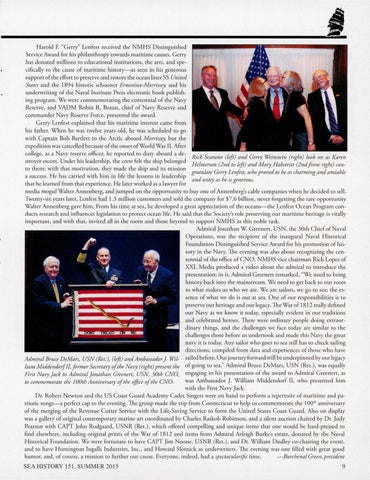 Harold F. "Gerry" Lenfest received the NMHS Distinguished Service Award for his philanthropy towards maritime causes. Gerry has donated millions to educational institutions, the arts, and specifically ro the cause of maritime history-as seen in his generous support of the effort to preserve and restore the ocean liner SS United States and the 1894 historic schoo ner Ernestina-Morrissey, and his underwriting of the Naval Institute Press electronic book publishing program. We were commemorating the centennial of the Navy Reserve, and VADM Robin R. Braun, chief of Navy Reserve and commander Navy Reserve Force, presented the award. Gerry Lenfest explained that his maritime interest came from his father. When he was twelve years old, he was scheduled ro go with Captain Bob Bartlett ro the Arctic aboard Morrissey, but the expedition was cancelled because of the onset ofWorld War II. After college, as a Navy reserve officer, he reported ro duty aboard a deRick Scarano (left) and Gerry Weinstein (right) look on as Karen stroyer escort. Under his leadership, the crew felt the ship belonged Helmerson (2nd to left) and Mary Habstritt (2nd from right) conro them; with that motivation, they made the ship and its mission gratulate Gerry Lenfest, who proved to be as charming and amiable a success. He has carried with him in life the lessons in leadership and witty as he is generous. that he learned from that experience. He later worked as a lawyer for media mogul Walter Annenberg, and jumped on the opportunity to buy one of Annenberg's cable companies when he decided ro sell. Twenty-six years later, Lenfest had 1.3 million customers and sold the company for $7.6 billion, never forgetting the rare opportunity Walter Annenberg gave him. From his time at sea, he developed a great appreciation of the oceans-the Lenfest Ocean Program conducts research and influences legislation ro protect ocean life. He said that the Society's role preserving o ur maritime heritage is virally important, and with that, invited all in the room and those beyond ro support NMHS in this noble task. Admiral Jonathan W Greenert, USN, the 30th ChiefofNaval Operations, was the recipient of the inaugural Naval Historical Foundation Distinguished Service Award for his promotion of history in the Navy. The even ing was also about recognizing the centennial of the office of CNO. NMHS vice chairman Rick Lopes of XXL Media produced a video about the admiral to introduce the presentation; in it, Admiral Greenen remarked, "We need to bring history back into the mainstream. We need to get back ro our roots to what makes us who we are. We are sailors, we go ro sea; the essence of what we do is out at sea. One of our responsibilities is to preserve our heritage and o ur legacy. The War of 1812 really defined our Navy as we know it today, especially evident in our traditions and celebrated heroes. There were ordinary people doing extraordinary things, and the chal lenges we face today are similar ro the challenges those before us undertook and made this Navy the great navy it is today. Any sailor who goes ro sea still has ro check sailing directions, compiled from data and experiences of those who have Admiral Bruce DeMars, USN (Ret.}, (left) and AmbassadorJ Wil- sailed before. Our journey forward will be underpinned by our legacy liam MiddendorfII, former Secretary ofthe Navy (right) present the of going to sea." Admiral Bruce DeMars, USN (Ret.), was equally First Navy jack to Admiral Jonathan Greenert, USN, 30th CNO, engaging in his presentation of the award ro Admiral Greenen, as was Ambassador J. William Middendorf II, who presented him to commemorate the 1 OOth Anniversary ofthe office ofthe CNO. with the First Navy Jack. Dr. Robert Newton and the US Coast Guard Academy Cadet Singers were on hand to perform a repertoire of maritime and patriotic songs-a perfect cap ro the evening. The group made the trip from Connecticut ro help us commemorate the lOO'h anniversary of the merging of the Revenue Cutter Service with the Life-Saving Service ro fo rm the United States Coast Guard. Also on display was a gal lery of origi nal contemporary marine arr coordinated by Charles Raskob Robinson , and a si lent auction chaired by Dr. Judy Pearson with CAPT John Rodgaard, USNR (Rer.), which offered compelling and unique items that one would be hard-pressed to find elsewhere, including original prints of the War of 1812 and items from Admiral Arleigh Burke's estate, donated by the Naval Historical Foundation. We were fortu nate ro have CAPT Jim Noone, USNR (Rer.), and Dr. William Dudley co-chairing the event, and to have Huntington Ingalls Industries, Inc., and Howard Slotnick as underwriters. The evening was one filled with great good humor, and, of course, a mission ro further our cause. Everyone, indeed, had a spectacularific time. -Burchenal Green, president