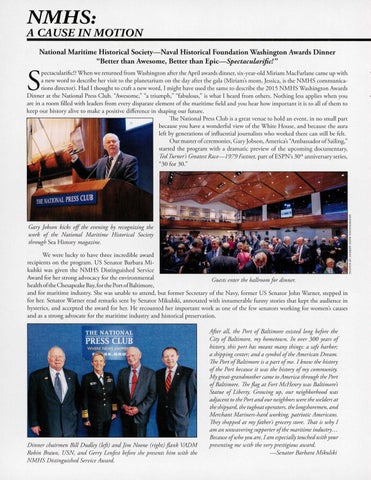 pectacularific!? When we returned from Washington after the April awards dinner, six-year-old Miriam Macfarlane came up with a new word to describe her visit to the planetarium on the day after the gala (Miriam's mom, Jessica, is the NMHS communications director). Had I thought to craft a new word, I might have used the sam e to describe the 2015 NMHS Washington Awards Dinner at the National Press C lub. "Awesom e," "a triumph," "fabulous," is what I heard from others. Nothing less applies when you are in a room filled with leaders from every disparate element of the maritime field and you hear how important it is to all of them to keep our history alive to make a positive difference in shaping our future. The National Press Club is a great venue to hold an event, in no small part because you have a wonderful view of the White House, and because the aura left by generations of influential journalists who worked there can still be felt. Our master of ceremonies, Gary Jobson, America's "Ambassador of Sailing," started the program with a dramatic preview of the upcoming documentary, Ted Turner's Greatest Race-1979 Fastnet, part ofESPN's 30'h anniversary series, "30 for 30."

Gary Jobson kicks off the evening by recognizing the work of the National Maritime H istorical Society through Sea History magazine.

We were lucky to have three incredible award recipients on the program. US Senator Barbara Mikulski was given the NMHS Distinguished Service Award for her strong advocacy for the environmental Guests enter the baffroom for dinner. health of the C hesapeake Bay, for the Port ofBaltimore, and for maritime industry. She was unable to attend, but former Secretary of the Navy, former US Senator John Warner, stepped in for her. Senator Warner read remarks sent by Senator Mikulski, annotated with innumerable funny stories that kept the audience in hysterics, and accepted the award for her. He recounted her important work as one of the few senators working for women's causes and as a strong advocate for the maritime industry and historical preservation.

After aLL, the Port of Baltimore existed long before the City of Baltimore, my hometown. In over 3 00 years of history, this port has meant many things: a safe harbor; a shipping center; and a symbol ofthe American D ream. lhe Port of Baltimore is a part of me. I knew the history of the Port because it was the history of my community. My great-grandmother came to America through the Port of Baltimore. lhe flag at Fort McHenry was Baltimore's Statue of Liberty. Growing up, our neighborhood was adjacent to the Port and our neighbors were the welders at the shipyard, the tugboat operators, the longshoremen, and Merchant Mariners-hard working, patriotic Americans. lhey shopped at my father's grocery store. lhat is why I am an unwavering supporter ofthe maritime industry . .. Because ofwho you are, I am especially touched with your presenting me with the very prestigious award. -Senator Barbara Mikulski