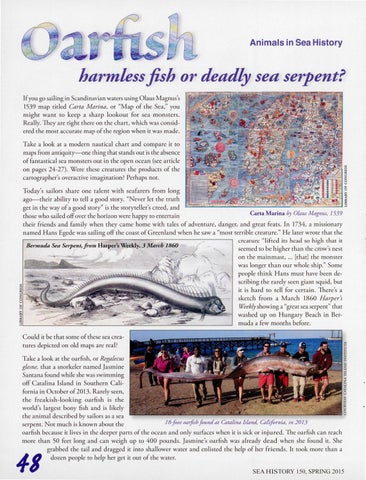 harmless fish or deadly sea serpent? If you go sailing in Scandinavian waters using Olaus Magnus&#39;s 1539 map titled Carta Marina, or &quot;Map of the Sea,&quot; you might want to keep a sharp lookout for sea monsters. Really. They are right there on the chart, which was considered the most accurate map of the region when it was made. Take a look at a modern nautical chart and compare it tO maps from antiquity-one thing that stands out is the absence of fantastical sea monsters out in the open ocean (see article on pages 24-27). Were these creatures the products of the carrographer&#39;s overactive imagination? Perhaps not. Today&#39;s sailors share one talent with seafarers from long ago-their ability to tell a good story. &quot;Never let the truth get in the way of a good srory&quot; is the sroryteller&#39;s creed, and those who sailed off over the horizon were happy t0 entertain

their friends and family when they came home with tales of adventure, danger, and great feats. In 1734, a missionary named Hans Egede was sailing off the coast of Greenland when he saw a &quot;most terrible creature.&quot; He later wrote that the creature &quot;lifted its head so high that it seemed t0 be higher than the crow&#39;s nest on the mainmast, ... [that] the monster was longer than our whole ship.&quot; Some people think Hans must have been describing the rarely seen giant squid, but it is hard to tell for certain. There&#39;s a sketch from a March 1860 Harper&#39;s Ci Weekly showing a &quot;great sea serpent&quot; that ~ washed up on Hungary Beach in Ber~ muda a few months before. Could it be that some of these sea creatures depicted on old maps are real? Take a look at the oarfish, or Regalecus glesne, that a snorkeler named Jasmine Santana found while she was swimming off Catalina Island in Southern California in Ocrober of2013. Rarely seen, the freakish-looking oarfish is the world&#39;s largest bony fish and is likely the animal described by sailors as a sea serpent. Not much is known about the

oarfish because it lives in the deeper parts of the ocean and only surfaces when it is sick or injured. The oarfish can reach more than 50 feet long and can weigh up to 400 pounds. Jasmine&#39;s oarfish was already dead when she found it. She grabbed the tail and dragged it into shallower water and enlisted the help of her friends. It took more than a dozen people to help her get it out of the water.

10 "Rough Weather All Day" -A Firsthand Account of the Jeannette Search Expedition, 1881-1882, by David Hirzel • 16 "I Shall Bring Home Two Frigates," Captain Charles Stewart and the Last Sea Battle of the War of 1812, by John A. Rodgaard • 20 The War of 1812's Final Chapter: At Sea and at the Negotiating Table, by William H. White • 24 Old Maps, Ships, & Sea Monsters: A Dangerous Combination, by Chet Van Duzer • 28 Ships Afire At Sea, by Fraser and Jourdan Houston • 34 The Resurrection of LCT 7074, a D-Day Survivor, by Nick Hewitt • 36 Schooner Sherman Zwicker: Making the Transition from Sail to Power on the Grand Banks, by James Wilkes • 42 National Maritime Historical Society's 2015 Washington Awards Dinner •