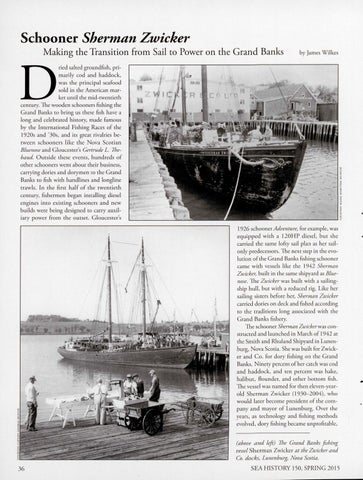 ried salted groundfish, primarily cod and haddock, was the pri ncipal seafood sold in the American market until the mid-twentieth century. The wooden schooners fishing the Grand Banks to bring us these fish have a long and celebrated history, made famous by the International Fishing Races of the 1920s and &#39;30s, and its great rivalries between schooners like the Nova Scotian Bluenose and Gloucester&#39;s Gertrude L. 1hebaud. Outside these events, hundreds of other schooners went about their business, carrying dories and dorymen to the Grand Banks to fish with handlines and longline trawls. In the first half of the twentieth century, fishermen began installing diesel engines into existing schooners and new builds were being designed to carry auxiliary powe r from the ou tset. Gloucester&#39;s

1926 schooner Adventure, fo r example, was equipped with a 120HP diesel, but she carried the same lofty sail plan as her sailonly predecessors. The next step in the evolution of the Grand Banks fishing schooner came with vessels like the 1942 Sherman Zwicker, built in the same shipyard as Bluenose. The Zwicker was built with a sailingship hull, but with a reduced rig. Like her sailing sisters before her, Sherman Zwicker carried dories on deck and fished according to the traditions long associated with the Grand Banks fishery. The schooner Sherman Zwicker was constructed and launched in March of 1942 at the Smith and Rhuland Shipyard in Lunenburg, Nova Scotia. She was built for Zwicker and Co. for dory fishing on the Grand Banks. Ninety percent of her catch was cod and haddock, and ten percent was hake, halibut, flounder, and other bottom fish. The vessel was named for then eleven-yearold Sherman Zwicker (1930-2004), who would later become president of the company and mayor of Lunenburg. Over the years, as technology and fishing methods evolved, dory fishing became unprofitable, (above and left) The Grand Banks fishing vessel Sherman Zwicker at the Zwicker and Co. docks, Lunenburg, Nova Scotia.

10 "Rough Weather All Day" -A Firsthand Account of the Jeannette Search Expedition, 1881-1882, by David Hirzel • 16 "I Shall Bring Home Two Frigates," Captain Charles Stewart and the Last Sea Battle of the War of 1812, by John A. Rodgaard • 20 The War of 1812's Final Chapter: At Sea and at the Negotiating Table, by William H. White • 24 Old Maps, Ships, & Sea Monsters: A Dangerous Combination, by Chet Van Duzer • 28 Ships Afire At Sea, by Fraser and Jourdan Houston • 34 The Resurrection of LCT 7074, a D-Day Survivor, by Nick Hewitt • 36 Schooner Sherman Zwicker: Making the Transition from Sail to Power on the Grand Banks, by James Wilkes • 42 National Maritime Historical Society's 2015 Washington Awards Dinner •