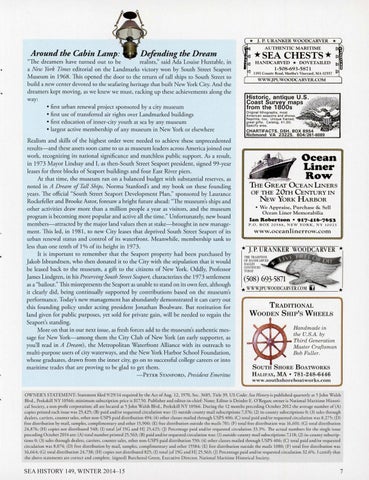 &quot;The dreamers have turned out to be realists,&quot; said Ada Louise Huxtable, in a New York Times editorial on the Landmarks victory won by South Street Seaport Museum in 1968 . This opened the door to the return of rail ships to South Street to build a new center devoted to the seafaring heritage that built New York C ity. And the dreamers kept moving, as we knew we must, racking up these achievements along the way: • first urban renewal project sponsored by a city museum • first use of transferred air rights over Landmarked buildings • first education of inner-city yo uth at sea by any museum • largest active membership of any museum in New York or elsewhere Realism and skills of the highest order were needed to achieve these unprecedented results-and these assets soon came to us as museum leaders across America joined our work, recognizing its national significance and matchless public support. As a result, in 1973 Mayor Lindsay and I, as then-South Street Seaport president, signed 99-year leases for three blocks of Seaport buildings and four East River piers. At that time, the museum ran on a balanced budget with substantial reserves, as noted in A Dream of Tafl Ships, Norma Stanford&#39;s and my book on these founding years. The official &quot;South Street Seaport Development Plan,&quot; sponsored by Laurance Rockefeller and Brooke Astor, foresaw a bright future ahead: &quot;The museum&#39;s ships and other activities draw more than a million people a year as visitors, and the museum program is becoming more popular and active all the time.&quot; Unfortunately, new board members-attracted by the major land values then at stake-brought in new management. This led, in 1981, to new City leases that deprived South Street Seaport of its urban renewal status and control of its waterfront. Meanwhile, membership sank to less than one tenth of 1% of its height in 1973. It is important to remember that the Seaport property had been purchased by Jakob Isbrandrsen, who then donated it to the City with the stipulation that it would be leased back to the museum, a gift to the citizens of New York. Oddly, Professor James Lindgren, in his Preserving South Street Seaport, characterizes the 1973 settlement as a &quot;bailout.&quot; This misrepresents the Seaport as unable to stand on its own feet, although it clearly did, being continually supported by contributions based on the museum&#39;s performance. Today&#39;s new management has abundantly demonstrated it can carry out this founding policy under acting president Jonathan Boulware. But restitution for land given for public purposes, yet sold for private gain, will be needed to regain the Seaport&#39;s standing. More on that in our next issue, as fresh forces add to the museum&#39;s authentic message for New York-among them the Ciry Club of New York (an early supporter, as yo u&#39;ll read in A Dream), the Metropolitan Waterfront Alliance with its outreach to multi-purpose users of city waterways, and the New York H arbor School Foundation, whose graduates, drawn from the inner city, go on to successful college careers or into maritime trades that are proving to be glad to get them . - PETER STANFORD , President Emeritus