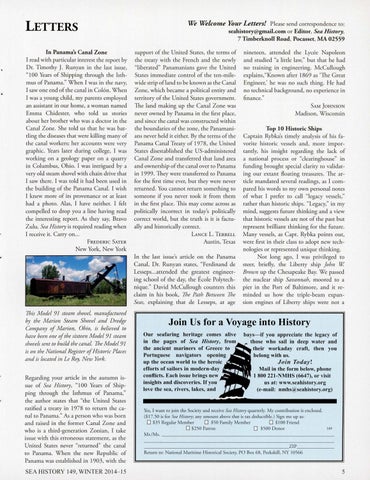 In Panama&#39;s Canal Zone I read with particular interest the report by Dr. Timothy J. Runyan in the last issue, &quot; 100 Years of Shipping through the Isthmus of Panama.&quot; When I was in the navy, I saw one end of the canal in Colon. When I was a yo ung child, my parents employed an assistant in our home, a woman named Emma Chidester, who told us stories abo ut her brother who was a doctor in the Canal Zone. She told us that he was battling the diseases that were killing many of the canal workers; her accounts were very graphic. Years later during college, I was working on a geology paper on a quarry in Columbus, Ohio. I was intrigued by a very old steam shovel with chain drive that I saw there. I was told it had been used in the building of the Panama Canal. I wish I knew more of its provenance or at least had a photo. Alas, I have neither. I felt compelled to drop you a line having read the interesting report. As they say, Bravo Zulu. Sea H istory is required reading when I receive it. Carry on ... FREDERIC SATER

support of the United States, the terms of the treaty with the French and the newly &quot;liberated&quot; Panamanians gave the United States immediate control of the ten-milewide strip ofland to be known as the Canal Zone, which became a political entity and territory of the United States government. The land making up the Canal Zone was never owned by Panama in the first place, and since the canal was constructed within the boundaries of the zone, the Panamanians never held it either. By the terms of the Panama Canal Treaty of 1978, the United States disestablished the US-administered Canal Zone and transferred that land area and ownership of the canal over to Panama in 1999. They were transferred to Panama for the first time ever, but they were never returned. You cannot return something to someone if you never took it from them in the first place. This may come across as politically incorrect in today&#39;s politically correct world, but the truth is it is factually and historically correct. LANCE

New York, New York In the last issue&#39;s article on the Panama Canal, Dr. Runyan states, &quot;Ferdinand de Lesseps .. .attended the greatest engineering school of the day, the Ecole Polytechnique.&quot; David McCullough counters this claim in his book, lhe Path Between lhe Seas, explaining that de Lesseps, at age lhis Model 9 1 steam shovel, manufactured by the Marion Steam Shovel and Dredge Company of Marion, Ohio, is believed to have been one ofthe sixteen Model 91 steam shovels sent to build the canal. lhe Model 91 is on the National Register ofHistoric Places and is located in Le Roy, New York. Regarding yo ur article in the autumn issue of Sea History, &quot;100 Years of Shipping through the Isthmus of Panama,&quot; the author states that &quot;the United States ratified a treaty in 1978 to return the canal to Panama.&quot; As a person who was born and raised in the former Canal Zone and who is a third-generation Zonian, I take issue with this erroneous statement, as the United States never &quot;returned&quot; the canal to Panama. When the new Republic of Panama was established in 1903, with the SEA HISTORY 149, WINTER2014- 15

nineteen, attended the Lycee Napoleon and studied &quot;a little law,&quot; but that he had no training in engineering. McCullough explains,&quot;Known after 1869 as &#39;The Great Engineer,&#39; he was no such thing. He had no technical background, no experience in finance.&quot; SAM]OHNSON

Top 10 Historic Ships Captain Rybka&#39;s timely analysis of his favorite historic vessels and, more importantly, his insight regarding the lack of a national process or &quot;clearinghouse&quot; in funding brought special clarity to validating our extant floating treasures. The article mandated several readings, as I compared his words to my own personal notes of what I prefer to call &quot;legacy vessels,&quot; rather than historic ships. &quot;Legacy,&quot; in my mind, suggests future thinking and a view that historic vessels are not of the past but represent brilliant thinking for the future. Many vessels, as Capt. Rybka points out, were first in their class to adopt new technologies or represented unique thinking. Not long ago, I was privileged to steer, briefly, the Liberty ship john W Brown up the Chesapeake Bay. We passed the nuclear ship Savannah, moored to a pier in the Port of Baltimore, and it reminded us how the triple-beam expansion engines of Liberty sh ips were not a