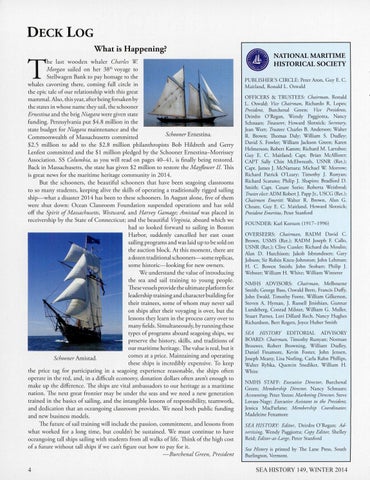 he las t wooden whaler Charles W Mo rgan sailed on her 38&#39;h voyage to Stellwagen Bank to pay hom age to the whales cavorting there, coming full circle in the epic tale of our relationship with this great mammal. Also, this year, after being forsaken by the states in whose nam e they sail, the schooner Ernestina and the brig Niagara were given state funding. Pennsylvania put $4.8 million in the state budget for N iagara maintenance and the Schooner Ernestina. Commonwealth of M assachusetts committed $2.5 million to add to the $2. 8 million philanthropists Bob Hildreth and Gerry Lenfest committed and the $ 1 million pledged by the Schooner Ernestina-Morrissey Association. SS Columbia, as you will read on pages 40-4 1, is finally being restored. Back in M assachusetts, the state has given $2 million to restore the M ayflower JI. This is great news for the maritime heritage community in 201 4. But the schooners, the beautiful schooners that have been seagoing classrooms to so many students, keeping alive the skills of operating a traditionally rigged sailing ship-what a disaster 201 4 has been to these schooners. In August alone, five of them were shut down: Ocean Classroom Foundation suspended operations and has sold off the Sp irit of M assachusetts, Westward, and Harvey Gamage; Amistad was placed in receivership by the State of Connecticut; and the beautiful Virginia, aboard which we had so looked fo rward to sailing in Boston H arbor, suddenly cancelled her east coast sailing programs and was laid up to be sold on the auction block. At this moment, there are a dozen traditional schooners- some replicas, some historic- looking for new owners. We understand the value of introducing the sea and sail training to young people. These vessels provide the ultimate platform for leadership training and character building for their trainees, some of whom may never sail on ships after their voyaging is over, but the lessons they learn in the process carry over to many fields. Simultaneously, by running these types of programs aboard seagoing ships, we preserve the histo ry, skills, and traditions of our maritime heritage. The value is real, but it Schooner Amistad. comes at a price. M aintaining and operating these ships is incredibl y expensive. To keep the price tag fo r participating in a seagoing experience reasonable, the ships often operate in the red, and, in a difficult economy, donation dollars often aren&#39;t enough to make up the difference. The ships are vital ambassadors to our heritage as a maritime nation. The next great frontier may be under the seas and we need a new generation trained in the basics of sailing, and the intangible lessons of responsibility, teamwork, and dedication that an oceangoing classroom provides. We need bo th public funding and new business models. The future of sail training will include the passion , commitment, and lessons from what worked for a long time, but couldn&#39;t be sustained. We must continue to have oceangoing tall ships sailing with students from all walks of life. Think of the high cost of a future without tall ships if we can&#39;t figure out how to pay for it. - Burchenal Green, President