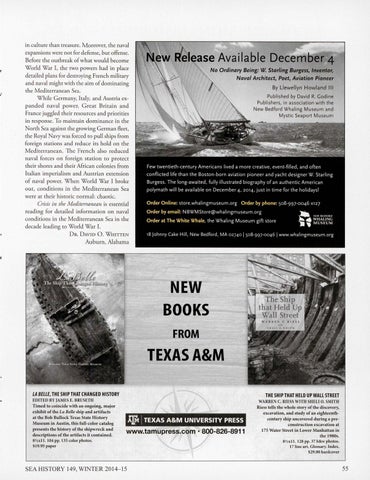 in culture than treasure. Moreover, the naval expansions were not for defense, but offense. Before the outbreak of what would become World War I, the two powers had in place detailed plans for destroying French military and naval might with the aim of dominating the Mediterranean Sea. While Germany, Iraly, and Austria expanded naval power, Great Britain and France juggled their resources and priorities in response. To maintain dominance in the North Sea against the growing German fleet, the Royal Navy was forced to pull ships from foreign stations and reduce its hold on the Mediterranean. The French also reduced naval forces on foreign station to protect their shores and their African colonies from Italian imperialism and Austrian extension of naval power. When World War I broke out, conditions in the Mediterranean Sea were at their historic no rmal: chaotic. Crisis in the Mediterranean is essential reading for detailed information on naval conditions in the Mediterranean Sea in the decade leading ro World War I. DR. DAVID

TEXASA&amp;M LA BELLE, THE SHIP THAT CHANGED HISTORY EDITED BY JAMES E. BRUSETH Timed to coincide with an ongoing, major exhibit of the La Belle ship and artifacts at the Bob Bullock Texas State History Museum in Austin, this full-color catalog presents the history of the shipwreck and descriptions of the artifacts it contained. 8Y,xl I. 104 pp. 135 color photos. $19.95 paper

THE SHIP THAT HELD UP WALL STREET

WARREN C. RIESS WITH SHELi 0. SMITH Riess tells the whole story of the discovery, excavation, and study of an eighteenthcentury ship uncovered during a preconstruction excavation at 175 Water Street in Lower Manhattan in the 1980s. SY.xi I. 128 pp. 37 b&amp;w photos. 17 line art. Glossary. Index. $29.00 hardcover