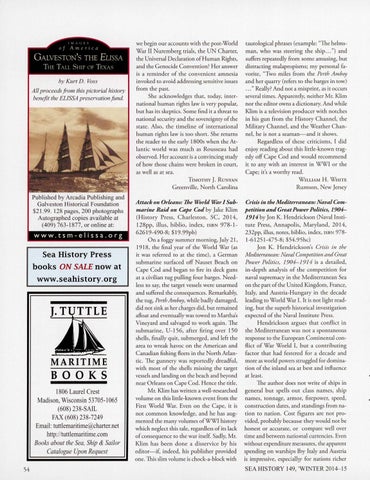 by Kurt D. Voss All proceeds from this pictorial history benefit the ELISSA preservation fund

we begin our accounts with the post-World War II Nuremberg trials, the UN Charter, the Universal Declaration of Human Rights, and the Genocide Convention? Her answer is a reminder of the convenient amnesia invoked to avoid addressing sensitive issues from the past. She acknowledges that, today, international human rights law is very popular, but has its skeptics. Some find it a threat to national security and the sovereignty of the state. Also, the timeline of international human rights law is too short. She returns the reader to the early 1800s when the Atlantic world was much as Rousseau had observed. Her account is a convincing study of how those chains were broken in court, as well as at sea. TIMOTHY

tautological phrases (example: &quot;The helmsman, who was steering the ship ... &quot;) and suffers repeatedly from some amusing, but distracting malapropisms; my personal favorite, &quot;Two miles from the Perth Amboy and her quarry (refers to the barges in tow) ... &quot; Really? And not a misprint, as it occurs several times. Apparently, neirher Mr. Klim nor the editor owns a dictionary. And while Klim is a television producer with notches in his gun from rhe History Channel, the Military Channel, and the Weather Channel, he is not a seaman-and ir shows. Regardless of these criticisms, I did enjoy reading abour this little-known tragedy off Cape Cod and would recommend it to any wirh an interest in WWl or the Cape; it&#39;s a worthy read. WILLIAM

Attack on Orleans: The World Wtir I Submarine Raid on Cape Cod by Jake Klim (History Press, Charleston, SC, 2014, 128pp, illus, biblio , index, ISB N 978- 162619-490-8; $19.99pb) On a foggy summer morning, July 21, 1918, the final year of the World War (as it was referred to at the time), a German submarine surfaced off Nauset Beach on Cape Cod and began to fire its deck guns at a civilian tug pulling four barges. Needless to say, the target vessels were unarmed and suffered the consequences. Remarkably, the tug, Perth Amboy, while badly damaged, did not sink as her charges did, but remained aBoat and eventually was towed to Martha&#39;s Vineyard and salvaged to work again. The submarine, U-156, after firing over 150 shells, finally quit, submerged, and lefr the area to wreak havoc on the American and Canadian fishing Beets in the North Atlantic. The gunnery was reportedly dreadful, with most of the shells missing the target vessels and landing on the beach and beyond near Orleans on Cape Cod. Hence the title. Mr. Klim has written a well-researched volume on this little-known event from the First World War. Even on the Cape, it is not common knowledge, and he has augmented the many volumes ofWWl history which neglect this tale, regardless of its lack of consequence to the war itself. Sadly, Mr. Klim has been done a disservice by his editor-if, indeed, his publisher provided one. This slim volume is chock-a-block with

Crisis in the Mediterranean: Naval Competition and Great Power Politics, 19041914 by Jon K. Hendrickson (Naval Institute Press, Annapolis, Maryland, 2014, 232pp, illus, notes, biblio, index, ISBN 9781-61251-475-8; $54.95hc) Jon K. Hendrickson&#39;s Crisis in the Mediterranean: Naval Competition and Great Power Politics, 1904-1914 is a detailed, in-depth analysis of the competition for naval supremacy in the Mediterranean Sea on rhe part of rhe Uni red Kingdom, France, Iraly, and Austria-Hungary in the decade leading to World War I. It is nor lighr reading, bur rhe superb historical investigation expected of the Naval Institute Press . Hendrickson argues that conflict in rhe Mediterranean was not a spontaneous response to rhe European Continental conBicr of War World I, but a contributing factor that had festered for a decade and more as world powers struggled for domination of the inland sea at best and influence at least. The author does not write of ships in general but spells out class n ames, ship names, tonnage, armor, firepower, speed, construction dates, and standings from nation to nation. Cost figures are nor provided, probably becaus&lt;e they would nor be honest or accurate, or compare well over time and between natiomal currencies. Even without expenditure measures, the apparent spending on warships !:by Italy and Austria is impressive, especiall)y for nations richer