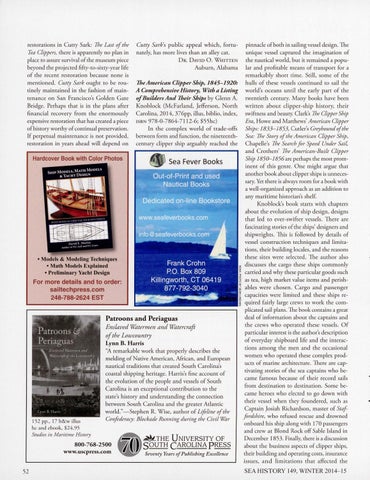 restorations in Curry Sark: The Last of the Tea Clippers, there is apparently no plan in place to assure survival of the museum piece beyond the projected fifry-to-sixry-year life of the recent restoration because none is mentioned. Cutty Sark ought to be routinely maintained in the fashion of maintenance on San Francisco&#39;s Golden Gate Bridge. Perhaps that is in the plans after financial recovery from the enormously expensive restoration that has created a piece of history worthy of continual preservation. If perpetual maintenance is not provided, restoration in years ahead will depend on

The American Clipper Ship, 1845-1920: A Comprehensive History, With a Listing ofBuilders And Their Ships by Glenn A. Knoblock (McFarland, Jefferson, North Carolina, 2014, 376pp, illus, biblio, index, ISBN 978-0-7864-7112-6; $55hc) In the complex world of trade-offs berween form and function, the ninereenrhcentury clipper ship arguably reached the

Patroons and Periaguas Enslaved Watermen and Watercraft ofthe Lowcountry Lynn B. Harris &quot;A remarkable work that properly describes the melding of Native American, African, and European nautical traditions that created South Carolina&#39;s coastal shipping heritage. Harris&#39;s fine account of the evolution of the people and vessels of South Carolina is an exceptional contribution to the state&#39;s history and understanding the connection berween South Carolina and the greater Atlantic world.&quot;-Srephen R. Wise, author of Lifeline ofthe 152 pp., 17 b&amp;w illus he and ebook, $24.95 Studies in Maritime History

pinnacle of both in sailing vessel design. The unique vessel captured the imagination of the nautical world, but it remained a popular and profitable means of transport for a remarkably short rime. Still, some of the hulls of these vessels continued to sail the world&#39;s oceans until the early part of the rwentierh century. Many books have been written about clipper-ship history, their swiftness and beaury. Clark&#39;s The Clipper Ship Era, Howe and Matthews&#39; American Clipper Ships: 1833-1853, Curler&#39;s Greyhound ofthe

Sea: The Story of the American Clipper Ship, Chapelle&#39;s The Search for Speed Under Sail, and Crothers&#39; The American-Built Clipper Ship 1850-1856 are perhaps the most prominent of this genre. One might argue that another book about clipper ships is unnecessary. Yet there is always room for a book with a well-organized approach as an addition to any maritime historian&#39;s shelf. Knoblock&#39;s book srarrs with chapters about the evolution of ship design, designs that led to ever-swifter vessels. There are fascinating stories of the ships&#39; designers and shipwrights. This is fo llowed by derails of vessel construction techniques and limitations, their building locales, and the reasons these sires were selected. The author also discusses the cargo these ships commonly carried and why these particular goods such as tea, high marker value items and perishables were chosen. Cargo and passenger capacities were limited and these ships required fairly large crews to work the complicated sail plans. The book contains a great deal of information about the captains and the crews who operated these vessels. Of particular interest is the author&#39;s description of everyday shipboard life and the interactions among the men and the occasional women who operated these complex products of marine architecture. There are captivating stories of the sea captains who became famo us because of their record sails from destination to destination. Some became heroes who elected to go down with their vessel when they foundered, such as Captain Josiah Richardson, master of Staf fordshire, who refused rescue and drowned onboard his ship along with 170 passengers and crew at Blond Rock off Sable Island in December 1853. Finally, there is a discussion about the business aspects of clipper ships, their building and operating costs, insurance issues, and limitations that affected the