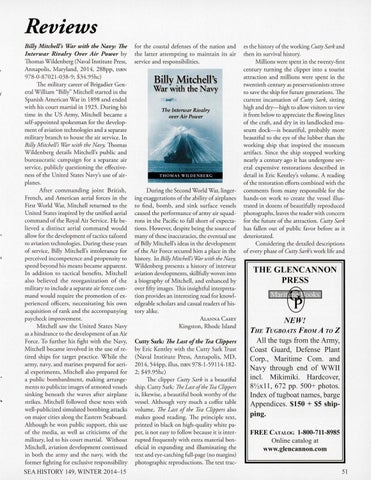 Reviews Billy Mitchell&#39;s ~r with the Navy: The Interwar Rivalry Over Air Power by Thomas Wildenberg (Naval Institute Press, Annapolis, Maryland, 2014, 288pp, ISBN 978-0-87021-038-9; $34.95hc) The military career of Brigadier General William &quot;Billy&quot; Mitchell started in the Spanish American War in 1898 and ended with his court martial in 1925. During his time in the US Army, Mitchell became a self-appointed spokesman for the development of aviation technologies and a separate military branch to house the air service. In Billy Mitchell&#39;s Wtir with the Navy, Thomas Wildenberg derails Mitchell&#39;s public and bureaucratic campaign for a separate air service, publicly questioning the effectiveness of the United States Navy&#39;s use of airplanes. After commanding joint British, French, and American aerial forces in the First World War, Mitchell returned to the United States inspired by the unified aerial command of the Royal Air Service. He believed a distinct aerial command would allow for the development of tactics tailored to aviation technologies. During these years of service, Billy Mitchell&#39;s intolerance for perceived incompetence and propensity to spend beyo nd his means became apparent. In addition to ractical benefits, Mitchell also believed the reorganization of the military to include a separate air force command would require the promotion of experienced officers, necessitating his own acquisition of rank and the accompanying paycheck improvement. Mitchell saw the United States Navy as a hindrance to the development of an Air Force. To further his fight with the Navy, Mitchell became involved in the use of retired ships for target practice. While the army, navy, and marines prepared for aerial experiments, Mitchell also prepared for a public bombardment, making arrangements to publicize images of armored vessels sinking beneath the waves after airplane strikes. Mitchell followed these tests with well-publicized simulated bombing attacks on major cities along the Eastern Seaboard . Although he won public support, this use of the media, as well as criticisms of the military, led to his court martial. Without Mitchell, aviation development continued in both the army and the navy, with the former fighting for exclusive responsibility

for the coastal defenses of the nation and the latter attempting to maintain its air service and responsibilities.

The Intenvar Rivalry over Air Power

During the Second World War, lingering exaggerations of the ability of airplanes to find, bomb, and sink surface vessels caused the performance of army air squadrons in the Pacific to fall short of expectations. However, despite being the source of many of these inaccuracies, the eventual use of Billy Mitchell&#39;s ideas in the development of the Air Force secured him a place in the history. In Billy Mitchell&#39;s Wtir with the Navy, Wildenberg presents a history of interwar aviation developments, skillfully woven into a biography of Mitchell, and enhanced by over fifty images. This insightful interpretation provides an interesting read for knowledgeable scholars and casual readers of history alike.

es the history of the working Cutty Sark and then its survival history. Millions were spent in the twenty-first century turning the clipper into a tourist attraction and millions were spent in the twentieth century as preservationists strove to save the ship for future generations. The current incarnation of Cutty Sark, sitting high and dry-high to allow visitors to view it from below to appreciate the flowing lines of the craft, and dry in its landlocked museum dock-is beautiful, probably more beautiful to the eye of the lubber than the working ship that inspired the museum artifact. Since the ship stopped working nearly a century ago it has undergone several expensive restorations described in detail in Eric Kentley&#39;s volume. A reading of the restoration efforts combined with the comments from many responsible for the hands-on work to create the vessel illustrated in dozens of beautifully reproduced photographs, leaves the reader with concern for the future of the attraction. Cutty Sark has fallen out of public favor before as it deteriorated. Considering the detailed descriptions of every phase of Cutty Sark&#39;s work life and

Cutty Sark: The Last ofthe Tea Clippers by Eric Kentley with the Cutty Sark Trust (Naval Institute Press, Annapolis, MD, 20 14, 544pp, illus, ISBN 978- 1-59114-1822; $49.95hc) The clipper Cutty Sark is a beautiful ship. Cutty Sark: The Last ofthe Tea Clippers is, likewise, a beautiful book worthy of the vessel. Although very much a coffee table volume, The Last of the Tea Clippers also makes good reading. The principle text, printed in black on high-quality white paper, is not easy to follow because it is interrupted frequently with extra material beneficial in expanding and illuminating the text and eye-catching full-page (no margins) photographic reproductions . The text trac-