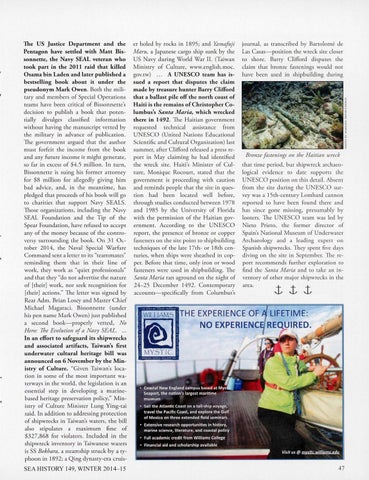 The US Justice Department and the Pentagon have settled with Matt Bissonnette, the Navy SEAL veteran who took part in the 2011 raid that killed Osama bin Laden and later published a bestselling book about it under the pseudonym Mark Owen. Both the military and members of Special Operations teams have been critical of Bissonne tte&#39;s decision to publish a book that potentially divulges classified information without having the manuscript vetted by the military in advance of publica tion . The government argued that the author must forfeit the income from the book and any future income it might generate, so fa r in excess of $4.5 million. In turn, Bissonnette is suing his former attorney for $8 million for allegedly giving him bad advice, and, in the meantime, has pledged that proceeds of his book wi ll go to charities that support Navy SEALS. Those organizations, including the N avy SEAL Foundation and the Tip of the Spear Foundation, have refused to accept any of the money because of the controversy surrounding the book. On 31 October 2014, the Naval Special Warfare Co mmand sent a letter to its &quot;teammates&quot; reminding them that in their lin e of work, they work as &quot;quiet professionals&quot; and that they &quot;do not adve rtise the n a ture of [their] wo rk, nor seek recognition for [their] ac tions.&quot; The letter was signed by Rear Adm. Brian Losey and Master Chief Michael Magaraci. Bissonnette (under his pen name Mark Owen) just published a second book-properly vetted, No Hero: The Evolution of a Navy SEAL. ... In an effort to safeguard its shipwrecks and associated artifacts, Taiwan&#39;s first underwater cultural heritage bill was announced on 6 November by the Ministry of Culture. &quot;Given Taiwan&#39;s location in some of the most importa nt waterways in the world, the legislation is an essential step in developing a marinebased heritage preservation policy,&quot; Ministry of Culture Minister Lung Ying-tai said. In addition to addressing protection of shipwrecks in Taiwan&#39;s waters, the bill also stipulates a maximum fine of $327, 868 for violators. Included in the shipwreck inventory in Taiwanese waters is SS Bokhara, a steamship struck by a typhoon in 1892; a Qing dynasty-era cruis-

er holed by rocks in 1895; and Yamafuji Maru, a Japanese cargo ship sunk by the US Navy during World War II. (Taiwan Ministry of Culture, www.english .moc. gov.cw) ... A UNESCO team has issued a report that disputes the claim made by treasure hunter Barry Clifford that a ballast pile off the north coast of Haiti is the remains of Christopher Columbus&#39;s Santa Maria, which wrecked there in 1492. The Haitian government requested technical assistance from UNESCO (United Nations Educational Scientific and Cultural Organization) las t summer, after Clifford released a press report in May claiming he had identified the wreck site. H aiti&#39;s Minister of C ulture, Monique Rocourt, stated that the government is proceeding with cauti on and reminds people that the site in question had been located well before, through studies conducted between 1978 and 1985 by the University of Florida with the permission of the H aitian government. According to the UNESCO report, the presence of bronze or copper fasteners on the site point to shipbuilding techniques of the late 17th- or 18th centuries, when ships were sheathed in copper. Before that time, only iron or wood fastene rs were used in shipbuilding. The Santa Ma ria ran aground on the night of 24-25 December 1492. C ontemporary acco unts- specifically from Columbus&#39;s

journal, as transcribed by Bartolome de Las Casas-position the wreck site closer to shore. Barry C lifford disputes the claim that bronze fas tenings wo uld not have been used in shipbuilding during

Bronze fastenings on the Haitian wreck that tim e period, but shipwreck archaeological evidence to date supports the UNESCO position on this detail. Absent from the site during the UNESCO survey was a 15th-century Lombard cannon reported to have been found there and has sin ce gone missing, presumably by looters. The UNESCO team was led by N ieto Prieto, the former director of Spain&#39;s National Museum of Underwater Archaeology and a leading expert on Spanish shipw recks. They spent five days diving on the site in September. The report recommends further exploration to find the Santa Maria and to take an inventory of other m ajor shipwrecks in the area.