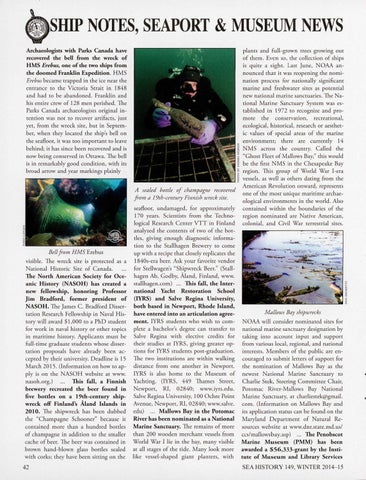 Archaeologists with Parks Canada have recovered the bell from the wreck of HMS Erebus, one of the two ships from the doomed Franklin Expedition. H MS Erebus became trapped in the ice near the entrance to the Victoria Strait in 1848 and had to be abandoned . Franklin and his entire crew of 128 m en perished . The Parks Can ada archaeologists original intention was no t to recover artifac ts, just ye t, from the wreck site, but in Septem ber, when they located the ship&#39;s bell on the seafloor, it was too im portant to leave behind ; it has since been recovered and is now being conserved in Ottawa. The bell is in remarkably good condition , with its broad arrow and year marki ngs plainly

A sealed bottle of champagne recovered from a I 9th-century Finnish wreck site.

Bell from HMS Erebus visible. The wreck site is protected as a National H istoric Site of C anada. The North American Society for Oceanic History (NASOH) has created a new fellowship, honoring Professor Jim Bradford, former president of NASOH. The Jam es C. Bradford Dissertation Research Fellowship in Naval H isto ry will award $ 1,000 to a PhD student fo r work in naval h istory or ocher topics in m aritime history. Applicants muse be full-tim e graduate students whose dissertation proposals have already been accepted by their university. D eadline is 15 March 201 5. (Inform atio n on how to apply is on the NASO H website at www. nasoh. org.) This fall, a Finnish brewery recreated the beer found in five bottles on a 19th-century shipwreck off Finland&#39;s Aland Islands in 2010. The sh ipwreck has been dubbed the &quot;Champagne Schooner&quot; because it contained m ore than a hundred bo ttles of champagn e in addition to the smaller cache of beer. The beer was contai ned in brown hand-blown glass bo ttles sealed wi th corks; chey have been sin ing on the 42

plants and fu ll-grown trees growing out of them . Even so, the collection of ships is quite a sight. Last June, NOAA anno unced chat it was reopening the nominatio n process fo r nationally significant m arine and freshwater si tes as potential new national marine sanctuaries. The National Marin e Sanctuary System was established in 1972 to recognize and prom ote the conservation, recreational, ecological, h istorical, research or aesthetic values of special areas of the m arine enviro nment; there are currently 14 NMS across the country. Called the &quot;Gh ost Fleet of M allows Bay,&quot; chis wo uld be the first N M S in che Ch esapeake Bay region. This gro up of Wo rld War I-era vessels, as well as others dating from the American Revolution onward, represents one of the m ost unique m aritime archaeological environments in th e world. Also contai ned within the bo undaries of the regio n nominated are Native Am erican, colonial, and Civil War terres trial sites . -- -· ~~~ --~-