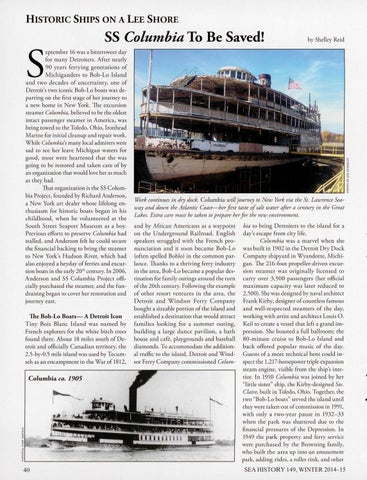 SS Columbia To Be Saved!

eptember 16 was a bittersweet day for many Detroiters. After nearly 90 yea rs ferrying generations of Michiganders to Bob-Lo Island and two decades of uncertainty, one of Detroit&#39;s two iconic Bob-Lo boats was departing on the first stage of her journey to a new home in New York. The excursion steamer Columbia, believed to be the oldest intact passenger steamer in America, was being towed to the Toledo, Ohio, Ironhead Marine for initial cleanup and repair work. While Columbia&#39;s many local admirers were sad to see her leave Michigan waters for good, most were heartened that she was going to be restored and taken care of by an organization that would love her as much as they had. Thar organization is the SS Columbia Project, founded by Richard Anderson, a New York art dealer whose lifelong enthusiasm for historic boats began in his childhood, when he volunteered at the South Street Seaport Museum as a boy. Previous efforts to preserve Columbia had stalled, and Anderson felt he could secure the financial backing to bring the steamer to New York&#39;s Hudson River, which had also enjoyed a heyday of ferries and excursion boats in the early 20&#39;hcentury. In 2006, Anderson and SS Columbia Project officially purchased the steamer, and the fundraisi ng began to cover her restoration and journey east.

The Bob-Lo Boats-A Detroit Icon Tiny Bois Blanc Island was named by French explorers for the white birch trees found there. About 18 miles south of D etroit and officially Canadian territory, the 2.5-by-0.5 mile island was used by Tecumseh as an encampment in the War of 1812,

Work continues in dry dock. Columbia will journey to New York via the St. Lawrence Seaway and down the Atlantic Coast- her first taste of salt water after a century in the Great Lakes. Extra care must be taken to prepare her for the new environment. and by African Americans as a waypoint on the Underground Railroad. English speakers struggled with the French pronunciation and it soon became Bob-Lo (often spelled Boblo) in the common parlance. Thanks to a thriving ferry industry in the area, Bob-Lo became a popular destination for family outings around the turn of the 20th century. Following the example of other resort ventures in the area, the Detroit and Windsor Ferry Company bought a sizeable portion of the island and established a destination that would attract families looking for a summer outing, building a large dance pavilion, a bath house and cafe, playgro unds and baseball diamonds. To accommodate the additional traffic to the island, Detroit and Windsor Ferry Company commissioned Colum-

bia to bring Detroiters to the island for a day&#39;s escape from city life. Columbia was a marvel when she was built in 1902 in the Detroit Dry Dock Company shipyard in Wyandotte, Michigan. The 216-foot propeller-driven excursion steamer was originally licensed to carry over 3,500 passengers (her official maximum capacity was later reduced to 2,500). She was designed by naval architect Frank Kirby, designer of countless famous and well-respected steamers of the day, working with artist and architect Louis 0 . Keil to create a vessel that left a grand impression. She boasted a full ballroom; the 80-minute cruise to Bob-Lo Island and back offered popular music of the day. Guests of a more technical bent could inspect the 1,217-horsepower triple expansion steam engine, visible from the ship&#39;s interior. In 1910 Columbia was joined by her &quot;little sister&quot; ship, the Kirby-designed Ste. Claire, built in Toledo, Ohio. Together, the two &quot;Bob-Lo boats&quot; served the island until they were taken our of commission in 1991, with only a two-year pause in 1932-33 when the park was shuttered due to the financial press ures of the D epression. In 1949 the park property and ferry service were purchased by the Browning family, who built the area up into an amusement park, adding rides, a roller rink, and other