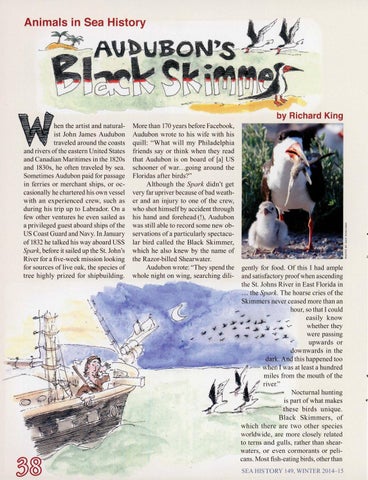 hen the artist and naturalist John James Audubon traveled around the coasts and rivers of the eastern United States and Canadian Maritimes in the 1820s and 1830s, he often traveled by sea. Sometimes Audubon paid for passage in ferries or merchant ships, or occasionally he chartered his own vessel with an experienced crew, such as during his trip up to Labrador. On a few other ventures he even sailed as a privileged guest aboard ships of the US Coast Guard and Navy. In January of 1832 he talked his way aboard USS Spark, before it sailed up the St. John&#39;s River for a five-week mission looking for sources of live oak, the species of tree highly prized for shipbuilding.

More than 170 years before Facebook, Audubon wrote to his wife with his quill: &quot;What will my Philadelphia friends say or think when they read that Audubon is on board of [a] US schooner of war.. .going around the Floridas after birds?&quot; Although the Spark didn&#39;t get very far upriver because of bad weather and an injury to one of the crew, who shot himself by accident through his hand and forehead(!) , Audubon was still able to record some new observations of a particularly spectacular bird called the Black Skimmer, which he also knew by the name of the Razor-billed Shearwater. Audubon wrote: &quot;They spend the whole night on wing, searching dili-