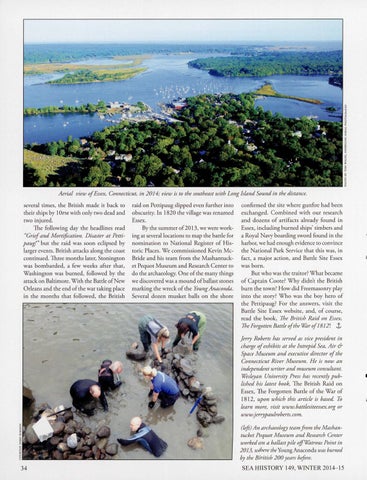 Aerial view ofEssex, Connecticut, in 2014; view is to the southeast with Long Island Sound in the distance.

several times, the British made it back to their ships by lOrM with only two dead and two injured. The following day the headlines read &quot;Grief and Mortification. Disaster at Pettipaug!&quot; but the raid was soon eclipsed by larger events. British attacks along the coast continued. Three months later, Stonington was bombarded, a few weeks after that, Washington was burned, followed by the attack on Baltimore. With the Battle of New Orleans and the end of the war taking place in the months that followed, the British

raid on Pettipaug slipped even further into obscurity. In 1820 the village was renamed Essex. By the summer of2013, we were working at several locations to map the battle for nomination to National Register of Historic Places. We commissioned Kevin McBride and his team from the Mashantucket Pequot Museum and Research Center to do the archaeology. One of the many things we discovered was a mound of ballast stones marking the wreck of the Young Anaconda. Several dozen musket balls on the shore

confirmed the site where gunfire had been exchanged. Combined with our research and dozens of artifacts already found in Essex, including burned ships&#39; timbers and a Royal Navy boarding sword found in the harbor, we had enough evidence to convince the National Park Service that this was, in fact, a major action, and Battle Site Essex was born. But who was the traitor? What became of Captain Coote? Why didn&#39;t the British burn the town? How did Freemasonry play into the story? Who was the boy hero of the Pettipaug? For the answers, visit the Barde Site Essex website, and, of course, read the book, The British Raid on Essex, The Forgotten Battle ofthe war of1812 ! J:, Jerry Roberts has served as vice president in charge ofexhibits at the Intrepid Sea, Air &amp; Space Museum and executive director of the Connecticut River Museum . He is now an independent writer and museum consultant. Wesleyan University Press has recently published his latest book, The British Raid on Essex, The Forgotten Battle of the War of 1812, upon which this article is based. To learn more, visit www. batt!esiteessex. org or www.jerrypaulroberts.com. (left) An archaeology team from the Mashantucket Pequot Museum and Research Center worked on a ballast pile ojfWiztrous Point in 2013, wlhere the Young Anaconda was burned by the Blritish 200 years before.