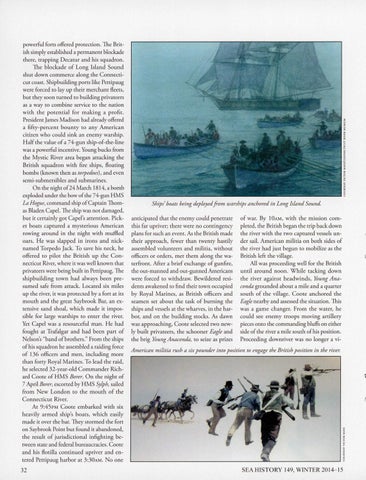 powerful forts offered protection. The British simply established a permanent blockade there, trapping Decatur and his squadron. The blockade of Long Island Sound shut down commerce along the Connecticut coast. Shipbuilding ports like Pettipaug were forced to lay up their merchant fleets, but they soon turned to building privateers as a way to combine service to the nation with the potential for making a profit. President James Madison had already offered a fifty-percent bounty to any American citizen who could sink an enemy warship. Half the value of a 74-gun ship-of-the-line was a powerful incentive. Young bucks from the Mystic River area began attacking the British squadron with fire ships, floating bombs (known then as torpedoes) , and even semi-submersibles and submarines. On the night of24 March 1814, a bomb exploded under the bow of the 7 4-gun HMS La Hogue, command ship of Captain Thomas Bladen Capel. The ship was not damaged, but it certainly got Capel&#39;s attention. Picket boats captured a mysterious American rowing around in the night with muffled oars. He was slapped in irons and nicknamed Torpedo Jack. To save his neck, he offered to pilot the British up the Connecticut River, where it was well known that privateers were being built in Pettipaug. The shipbuilding town had always been presumed safe from attack. Located six miles up the river, it was protected by a fort at its mouth and the great Saybrook Bar, an extensive sand shoal, which made it impossible for large warships to enter the river. Yet Capel was a resourceful man. He had fought at Trafalgar and had been part of Nelson&#39;s &quot;band of brothers.&quot; From the ships of his squadron he assembled a raiding force of 136 officers and men, including more than forty Royal Marines. To lead the raid, he selected 32-year-old Commander Richard Coote of HMS Borer. On the night of 7 April Borer, escorted by HMS Sylph, sailed from New London to the mouth of the Connecticut River. At 9:45PM Coote embarked with six heavily armed ship&#39;s boats, which easily made it over the bar. They stormed the fort on Saybrook Point but found it abandoned, the result of jurisdictional infighting between state and federal bureaucracies. Coote and his flotilla continued upriver and entered Pettipaug harbor at 3:30AM. No one 32

Ships&#39; boats being deployed from warships anchored in Long Island Sound. anticipated that the enemy could penetrate this far upriver; there were no contingency plans for such an event. As the British made their approach, fewer than twenty hastily assembled volunteers and militia, without officers or orders, met them along the waterfront. After a brief exchange of gunfire, the out-manned and out-gunned Americans were forced to withdraw. Bewildered residents awakened to find their town occupied by Royal Marines, as British officers and seamen set abo ut the task of burning the ships and vessels at the wharves, in the harbor, and on the building stocks. As dawn was approachi ng, Coote selected two newly built privateers, the schooner Eagle and the brig Young Anaconda, to seize as prizes

of war. By lOAM, with the mission completed, the British began the trip back down the river with the two captured vessels under sail. American militia on both sides of the river had just begun to mobilize as the British left the village. All was proceeding well for the British until around noon. While tacking down the river against headwinds, Young Anaconda gro unded about a mile and a quarter south of the village. Coote anchored the Eagle nearby and assessed the situation. This was a game changer. From the water, he could see enemy troops moving artillery pieces onto the commanding bluffs on either side of the river a mile south of his position. Proceeding downriver was no longer a vi-

American militia rush a six pounder into position to engage the British position in the river.