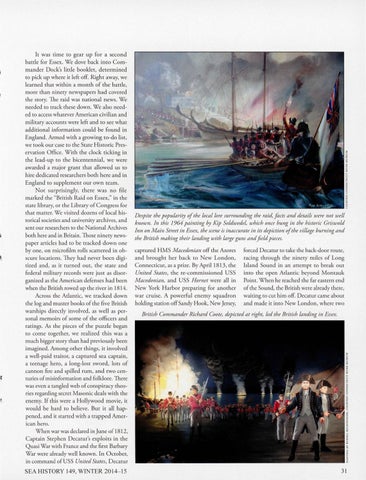 It was time to gear up for a second battle fo r Essex. We dove back into Commander Dock&#39;s little booklet, d etermined to pick up where it left off. Right away, we learned that within a month of the battle, more than ninety newspapers h ad covered the story. The raid was national news. We needed to track these down. We also needed to access whatever American civilian and military acco unts were left and to see what additional information could be fo und in England. Armed with a growing to-do list, we took our case to the State Historic Preservation O ffice. With the clock ticking in the lead-up to the bicentennial, we were awarded a major grant that allowed us to hire dedicated researchers both h ere and in England to supplement our own team . No t surprisingly, there was no fil e marked the &quot;British Raid on Essex,&quot; in the state library, or the Library of Con gress for that matter. We visited dozens of local historical societies and university archives, and sent our researchers to the National Archives both here and in Britain. Those ninety newspaper articles had to be tracked down one by one, on microfilm rolls scattered in obscure locations. They had never been digitized and, as it turned out, the state and federal military records were just as disorganized as the American defenses h ad been when the British rowed up the river in 18 14. Across the Atlantic, we tracked down the log and muster books of the five British warships directly involved, as well as personal mem oirs of some of the officers and ratings. As the pieces of the puzzle began to come together, we realized this was a much bigger story than had previously been imagi ned. Among other things, it in volved a well-paid trai tor, a captured sea captain, a teenage hero, a long-lost sword, lots of cannon fire and spilled rum, and two centuries of misinformation and folklore. There was even a tangled web of conspiracy theories regarding secret Masonic deals with the enemy. If this were a Hollywood movie, it wo uld be hard to believe. But it all happened, and it started with a trapped American hero. W hen war was declared in June of l 812, Captain Stephen Decatur&#39;s exploits in the Q uasi War with France and the first Barbary War were al ready well known. In O ctober, in command of USS United States, D ecatur SEA HISTORY 149, WINTER 2014- 15

D esp ite the popularity of the local lore surrounding the raid, facts and details were not well known. In this 1964 painting by Kip Soldwedel, which once hung in the historic Griswold Inn on M ain Street in Essex, the scene is inaccurate in its depiction ofthe village burning and the British making their landing with large guns and field pieces.

captured H MS Macedonian off the Azores and brought her back to New London, Connecticut, as a p rize. By Ap ril 18 13, the United States, the re-commissioned USS Macedonian, and USS H ornet were all in New York H arbor preparing for another war cruise. A powerful enemy squadron holding station off Sandy Hook, New Jersey,

forced Decatur to take the back-door route, racing thro ugh rhe ninety miles of Long Island Sound in an attempt to break our into the open Atlantic beyond Montauk Point. When he reached the far eastern end of the Sound, the British were already there, waiting to cut him off. Decatu r came about and made it into New London, where two