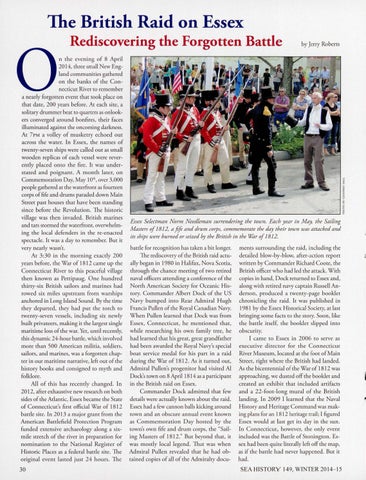 The British Raid on Essex Rediscovering the Forgotten Battle

n the evening of 8 April 2014, three small New England communities gathered on the banks of the Connecticut River to remember a nearly forgotten event that took place on that date, 200 years before. At each site, a solitary drummer beat to quarters as onlookers converged around bonfires, their faces illuminated against the oncoming darkness. At 7PM a volley of musketry echoed out across the water. In Essex, the names of twenty-seven ships were called out as small wooden replicas of each vessel were reverently placed onto the fire. It was understated and poignant. A month later, on Commemoration Day, May lO&#39;h, over 3,000 people gathered at the waterfront as fourteen corps of fife and drums paraded down Main Street past houses that have been standing since before the Revolution. The historic village was then invaded. British marines Essex Selectman Norm Needleman surrendering the town. Each year in May, the Sailing and tars stormed the waterfront, overwhelmMasters of 1812, a fife and drum corps, commemorate the day their town was attacked and ing the local defenders in the re-enacted its ships were burned or seized by the British in the Wtir of 1812. spectacle. It was a day to remember. But it battle for recognition has taken a bit longer. ments surrounding the raid, including the very nearly wasn&#39;t. The rediscovery of the British raid actu- detailed blow-by-blow, after-action report At 3:30 in the morning exactly 200 years before, the War of 1812 came up the ally began in 1980 in Halifax, Nova Scotia, written by Commander Richard Coote, the Connecticut River to this peaceful village through the chance meeting of two retired British officer who had led the attack. With then known as Pettipaug. One hundred naval officers attending a conference of the copies in hand, Dock returned to Essex and, thirty-six British sailors and marines had North American Society for Oceanic His- along with retired navy captain Russell Anrowed six miles upstream from warships tory. Commander Alben Dock of the US derson, produced a twenty-page booklet anchored in Long Island Sound. By the time Navy bumped into Rear Admiral Hugh chronicling the raid. It was published in they departed, they had put the torch to Francis Pullen of the Royal Canadian Navy. 1981 by the Essex Historical Society, at last twenty-seven vessels, including six newly When Pullen learned that Dock was from bringing some facts to the story. Soon, like the battle itself, the booklet slipped into built privateers, making it the largest single Essex, Connecticut, he mentioned that, maritime loss of the war. Yet, until recently, while researching his own family tree, he obscurity. I came to Essex in 2006 to serve as this dynamic 24-hour battle, which involved had learned that his great, great grandfather more than 500 American militia, soldiers, had been awarded the Royal Navy&#39;s special executive director for the Connecticut sailors, and marines, was a forgotten chap- boat service medal for his part in a raid River Museum, located at the foot of Main ter in our maritime narrative, left out of the during the War of 1812. As it turned out, Street, right where the British had landed. history books and consigned to myth and Admiral Pullen&#39;s progenitor had visited Al As the bicentennial of the War of 1812 was Dock&#39;s town on 8 April 1814 as a participant approaching, we dusted off the booklet and folklore. created an exhibit that included artifacts All of this has recently changed. In in the British raid on Essex. Commander Dock admitted that few and a 22-foot-long mural of the British 2012, after exhaustive new research on both sides of the Atlantic, Essex became the State details were actually known about the raid. landing. In 2009 I learned that the Naval of Connecticut&#39;s first official War of 1812 Essex had a few cannon balls kicking around History and Heritage Command was makbattle site. In 2013 a major grant from the town and an obscure annual event known ing plans for an 1812 heritage trail; I figured American Battlefield Protection Program as Commemoration Day hosted by the Essex would at last get its day in the sun. funded extensive archaeology along a six- town&#39;s own fife and drum corps, the &quot;Sail- In Connecticut, however, the only event mile stretch of the river in preparation for ing Masters of 1812.&quot; But beyond that, it included was the Battle of Stonington. Esnomination to the National Register of was mostly local legend. That was when sex had been quite literally left off the map, Historic Places as a federal battle site. The Admiral Pullen revealed that he had ob- as if the battle had never happened. But it original event lasted just 24 hours. The tained copies of all of the Admiralty docu- had. 30