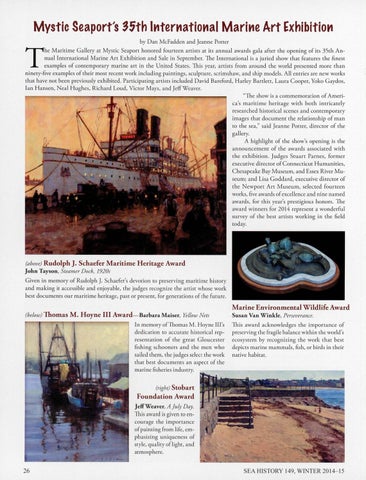 he Maritime Gallery at Mystic Seaport honored fourteen artists at its annual awards gala after the opening of its 35th Annual International Marine Art Exhibition and Sale in September. The International is a juried show that features the finest examples of contemporary marine art in the United States. This year, artists from around the world presented more than ninety-five examples of their most recent work including paintings, sculpture, scrimshaw, and ship models. All entries are new works that have not been previously exhibited. Participating artists included David Bareford, Harley Bartlett, Laura Cooper, Yoko Gaydos, Ian Hansen, Neal Hughes, Richard Loud, Victor Mays, and Jeff Weaver. &quot;The show is a commemoration of America&#39;s maritime heritage with both intricately researched historical scenes and contemporary images that document the relationship of man to the sea,&quot; said Jeanne Potter, director of the gallery. A highlight of the show&#39;s opening is the announcement of the awards associated with the exhibition. Judges Stuart Parnes, former executive director of Connecticut Humanities, Chesapeake Bay Museum, and Essex River Museum; and Lisa Goddard, executive director of the Newport Art Museum, selected fourteen works, five awards of excellence and nine named awards, for this year&#39;s prestigious honors. The award winners for 2014 represent a wonderful survey of the best artists working in the field today.

Given in memory of Rudolph J. Schaefer&#39;s devotion to preserving maritime history and making it accessible and enjoyable, the judges recognize the artist whose work best documents our maritime heritage, past or present, for generations of the future. (below) Thomas M. Hoyne Ill Award-Barbara Maiser, Yellow Nets

In memory of Thomas M. Hoyne Ill&#39;s dedication to accurate historical representation of the great Gloucester fishing schooners and the men who sailed them, the judges select the work that best documents an aspect of the marine fisheries industry.

Marine Environmental Wildlife Award Susan Van Winkle, Perseverance. This award acknowledges the importance of preserving the fragile balance within the world&#39;s ecosystem by recognizing the work that best depicts marine mammals, fish, or birds in their native habitat.

This award is given to encourage the importance of painting from life, emphasizing uniqueness of style, quality oflight, and atmosphere.