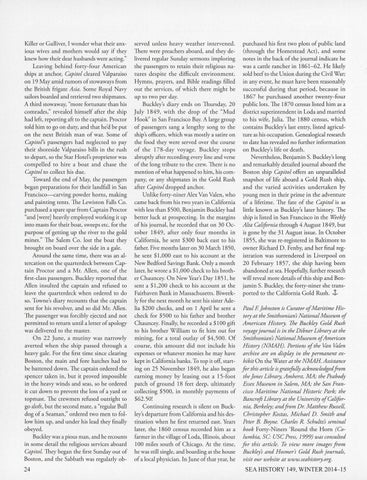 Killer or Gulliver, I wonder what their anxious wives and mothers would say if they knew how their dear husbands were acting.&quot; Leaving behind forty-four American ships at anchor, Capitol cleared Valparaiso on 19 May amid rumors of stowaways from the British frigate Asia. Some Royal Navy sailors boarded and retrieved rwo shipmates. A third stowaway, &quot;more fortunate than his comrades,&quot; revealed himself after the ship had left, reporting aft to the captain. Proctor told him to go on duty, and that he&#39;d be put on the next British man of war. Some of Capitol&#39;s passengers had neglected to pay their shoreside Valparaiso bills in the rush to depart, so the Star Hotel&#39;s proprietor was compelled to hire a boat and chase the Capitol to collect his due. Toward the end of May, the passengers began preparations for their landfall in San Francisco-carving powder horns, making and painting tents. The Lewiston Falls Co. purchased a spare spar from Captain Proctor &quot;and [were] heavily employed working it up into masts for their boat, sweeps etc. for the purpose of getting up the river to the gold mines.&quot; The Salem Co. lost the boat they brought on board over the side in a gale. Around the same time, there was an altercation on the quarterdeck berween Captain Proctor and a Mr. Allen, one of the first-class passengers. Buckley reported that Allen insulted the captain and refused to leave the quarterdeck when ordered to do so. Towne&#39;s diary recounts that the captain sent for his revolver, and so did Mr. Allen. The passenger was forcibly ejected and not permitted to return until a letter of apology was delivered to the master. On 22 June, a mutiny was narrowly averted when the ship passed through a heavy gale. For the first time since clearing Boston, the main and fore hatches had to be battened down. The captain ordered the spencer taken in, but it proved impossible in the heavy winds and seas, so he ordered it cut down to prevent the loss of a yard or topmast. The crewmen refused outright to go aloft, but the second mate, a &quot;regular Bull dog of a Seaman,&quot; ordered rwo men to follow him up, and under his lead they finally obeyed. Buckley was a pious man, and he recounts in some detail the religious services aboard Capitol. They began the first Sunday out of Boston, and the Sabbath was regularly ob-

served unless heavy weather intervened. There were preachers aboard, and they delivered regular Sunday sermons imploring the passengers to retain their religious natures despite the difficult environment. Hymns, prayers, and Bible readings filled out the services, of which there might be up to rwo per day. Buckley&#39;s diary ends on Thursday, 20 July 1849, with the drop of the &quot;Mud Hook&quot; in San Francisco Bay. A large group of passengers sang a lengthy song to the ship&#39;s officers, which was mostly a satire on the food they were served over the course of the 178-day voyage. Buckley stops abruptly after recording every line and verse of the long tribute to the crew. There is no mention of what happened to him, his company, or any shipmates in the Gold Rush after Capitol dropped anchor. Unlike forty-niner Alex Van Valen, who came back from his rwo years in California with less than $500, Benjamin Buckley had better luck at prospecting. In the margins of his journal, he recorded that on 30 October 1849, after only four months in California, he sent $300 back east to his father. Five months later on 30 March 1850, he sent $1,000 east to his account at the New Bedford Savings Bank. Only a month later, he wrote a $1,000 check to his brother Chauncey. On New Year&#39;s Day 1851, he sent a $1,200 check to his account at the Fairhaven Bank in Massachusens. Biweekly for the next month he sent his sister Adelia $200 checks, and on 1 April he sent a check for $500 to his father and brother Chauncey. Finally, he recorded a $100 gift to his brother William to fit him out for mining, for a total outlay of $4,500. Of course, this amount did not include his expenses or whatever monies he may have kept in California banks. To top it off, starting on 25 November 1849, he also began earning money by leasing out a 15-foot patch of ground 18 feet deep, ultimately collecting $500, in monthly payments of $62.50! Continuing research is silent on Buckley&#39;s departure from California and his destination when he first returned east. Years later, the 1860 census recorded him as a farmer in the village of Loda, Illinois, about 100 miles south of Chicago. At the time, he was still single, and boarding at the house of a local physician. In June of that year, he

purchased his first rwo plots of public land (through the Homestead Act), and some notes in the back of the journal indicate he was a cattle rancher in 1861-62. He likely sold beef to the Union during the Civil War; in any event, he must have been reasonably successful during that period, because in 1867 he purchased another twenty-four public lots. The 1870 census listed him as a district superintendent in Loda and married to his wife, Julia. The 1880 census, which contains Buckley&#39;s last entry, listed agriculture as his occupation. Genealogical research to date has revealed no further information on Buckley&#39;s life or death. Nevertheless, Benjamin S. Buckley&#39;s long and remarkably detailed journal aboard the Boston ship Capitol offers an unparalleled snapshot of life aboard a Gold Rush ship, and the varied activities undertaken by young men in their prime in the adventure of a lifetime. The fate of the Capitol is as little known as Buckley&#39;s later history. The ship is listed in San Francisco in the Weekly Alta CalifOrnia through 4 August 1849, but is gone by the 31 August issue. In October 1855, she was re-registered in Baltimore to owner Richard D. Fenby, and her final registration was surrendered in Liverpool on 20 February 1857, the ship having been abandoned at sea. Hopefully, further research will reveal more details of this ship and Benjamin S. Buckley, the forty-niner she transported to the California Gold Rush. J,

Paul F Johnston is Curator ofMaritime History at the Smithsonian&#39;s National Museum of American History. The Buckley Gold Rush voyage journal is in the Dibner Library at the Smithsonian&#39;s National Museum ofAmerican History (NMAH). Portions of the Vtin Vtilen archive are on display in the permanent exhibit On the Water at the NMAH Assistance for this article is gratefully acknowledgedfrom the Jones Library, Amherst, MA; the Peabody Essex Museum in Salem, MA; the San Francisco Maritime National Historic Park; the Bancroft Library at the University ofCalifOrnia, Berkeley; andfrom Dr. Matthew Russell, Christopher Kostas, Michael D. Smith and Peter B. Boyne. Charles R. Schultz&#39;s seminal book Forty-Niners &#39;Round the Horn (Columbia, SC: USC Press, 1999) was consulted for this article. To view more images from Buckley&#39;s and Hosmer&#39;s Gold Rush journals, visit our website at www.seahistory.org. SEA HISTORY 149, WINTER 2014- 15